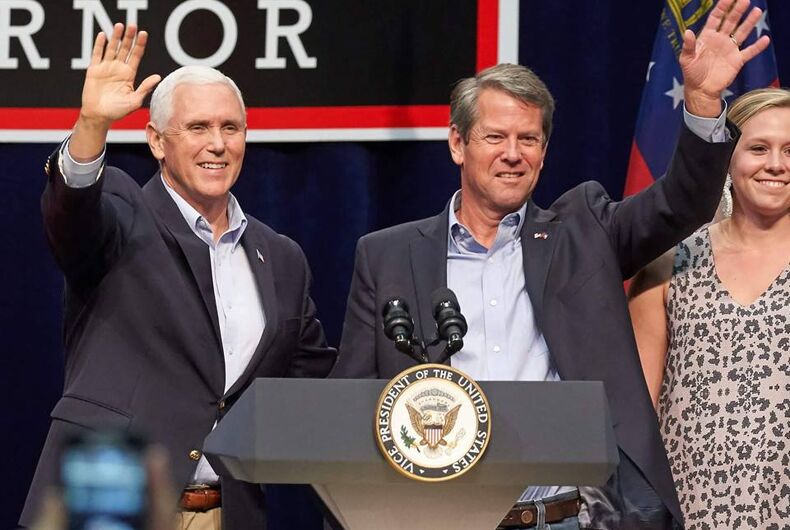 Who were the worst politicians of 2018? The Trump era has produced such a bumper crop of kooks, flakes, and conspiracy-hawking crazies that it’s hard to know where to begin.

There are the white nationalists and Holocaust deniers who were long-shot Republican candidates for public office. Then there are the appointees spinning through the Trump White House’s revolving door; the Justice Department by itself is a model of anti-LGBTQ craziness, from departing Attorney General Jeff Sessions to Acting Attorney General Mark Whitaker to William Barr, Trump’s nominee to replace Sessions.  There was also the plethora of anti-LGBTQ politicians overseas, including Brazil’s incoming president, Jair Bolsonaro.

But to keep things simple, let’s just focus on U.S. politicians are holding office or were credibly seeking it. It’s a long list, even with those limits, but here are a few pols who stand out from the crowd.

(It’s no surprise that all of them are Republicans. In fact, dishonorable mention to the Texas GOP for having a platform with 24 anti-LGBTQ planks in it — out of 81.)

Mike Pence. Pence has to top any list of anti-LGBTQ politicians. Indeed, he should be enshrined in the Phobe Hall of Fame. He started the year on the defensive when out Olympic skater Adam Rippon refused to meet with the vice president, calling him out for his anti-LGBTQ positions. That includes Pence’s support for conversion therapy, which Pence falsely claimed he never supported. Behind the scenes, Pence was the religious right’s hammer, deluding himself that he was chosen by God as president-in-waiting. No wonder even Trump himself joked about Pence  wanting to “hang gays.”

Steve King. The Iowa Republican won re-election to Congress in a race that was closer than it should have been. After years of xenophobic, homophobic and racist attacks, King apparently went too far for some corporate sponsors, who pulled support from his campaign in light of an interview with an Austrian political party founded by a former Nazi officer. King was undeterred. On the eve of the election suggested that Supreme Court justices Sonia Sotomayer and Elena Kagan were lesbian lovers.

Dana Rohrbacher. Rohrbacher, a California Republican, was nicknamed Putin’s Congressman because of his unfailing support of the Russian president. Like Putin, Rohrbacher is reflexively anti-LGBTQ. Last May, he told a group of realtors that “every homeowner should be able to make a decision not to sell their home to someone if they don’t agree with their lifestyle.”

Short version: It’s okay to discriminate against gays and lesbians. Rohrbacher lost his race for re-election in November, as demographic changes made his district much less conservative than when he was first elected in 1989.

Leah Vukmir. Vukmir is a Wisconsin state legislator who ran for the Senate against incumbent Democrat (and out lesbian) Tammy Baldwin. Vukmir had an impeccable anti-LGBTQ track record, opposing marriage equality and anti-bullying legislation. But what put her over the top was her attack on Baldwin as a “Team Terrorism” in an amateurish attempt to link Baldwin with Khalid Sheikh Muhammed, the mastermind behind the 9/11 attacks.

Despite Baldwin being a top target for Republicans, Vukmir proved a lousy candidate and was handily defeated by Baldwin.

Mary Fallin. The Oklahoma governor signed a bill last May makes it easy for agencies to stop gays and lesbians from adopting. The measure allows child welfare agencies in the state to refuse to work with anyone on religious freedom grounds, even though the foster system is overloaded.

Fallin has a long history of anti-LGBTQ bias; she once tried to stop the state National Guard from processing any benefits for same-sex married couples.

Brian Kemp. Kemp ran for Georgia governor as an unrepentant, knuckle-dragging right-winger and won. Kemp tried to out-Trump Trump. In his television ads, he brandished a rifle at a young man courting his daughter and boasted about having a big truck “in case I need to round up some illegals.” Kemp favors a religious liberty bill permitting anti-LGBTQ discrimination, a stand that makes state businesses jittery at the prospect of a boycott.

Inexplicably, Kemp’s campaign ran ads on Grindr, where his chances of picking up anything, let alone votes, was virtually nil.

From ‘Pose’ to politics, here are the best trans moments of 2018