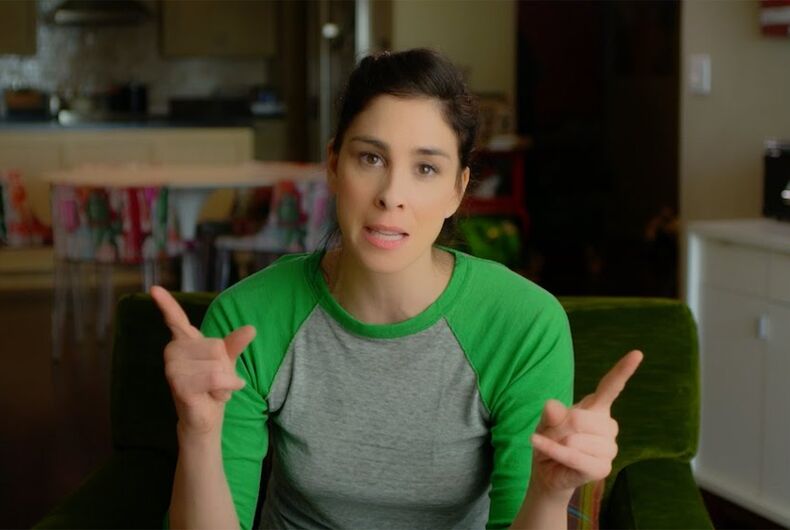 Shortly after black comedian Kevin Hart stepped down from hosting the Oscars over his past homophobic tweets and stand-up routines, American rapper Nick Cannon posted similarly homophobic jokes made in the past by white female comedians Sarah Silverman, Amy Schumer and Chelsea Handler.

Cannon wondered whether these white women faced any similar backlash for their use of anti-gay slurs. For a while, the comediennes didn’t respond — Schumer and Handler still haven’t — but Silverman has since stating that she’ll no longer use gayness as a punchline.

When asked about Cannon’s post by TMZ, Silverman replied, “Yeah, I’m done with that. I think I can find other ways to be funny. I mean, I used to say ‘gay’ all the time…’Oh, that’s so gay.’ We’re from Boston, we’d go, ‘That’s what we say in Boston. I have gay friends. I just say gay.’ And then I heard myself and I realized I was like the guy who said ‘What? I say colored…I have colored friends.’ And I realized it was stupid and I’m certainly creative enough to think of other words besides that, that don’t hurt people. But I f*ck up all the time.”

Opinions have been divided over what to make of homophobic humor, especially when it’s directed at hyper-masculine authoritarians like US President Donald Trump and Russian President Vladimir Putin. To some, such homophobia is lazy and perpetuates anti-gay sentiment. Others see homophobic jokes as irreverent and subversive attempts to shatter fragile masculinity.

In a popular Twitter thread, gay author Greg Hogben commented that gay people were quicker to forgive Silverman, Schumer and Handler because all three women had been vocal in their support of LGBTQ rights. Hart had no similar history when his anti-gay jokes resurfaced.

We also knew the history and backgrounds of these women. They used their massive platforms to help us long before marriage equality. And continue to do so. To use your examples of Sarah Silverman, Chelsea Handler and Amy Schumer… pic.twitter.com/k5qD1qUFtg

Gay comedian Billy Eichner said he considered Cannon’s point as “compelling” and added, “Here’s my personal opinion: Just don’t use the word. It’s as simple as that. There are so many other words to use. Now, because I am a grown up and not a child, I do take context, nuance and *intention* into consideration.”

He continued, “I agree that the best thing to do is to just not use the damn word! As a gay man, unless it’s perhaps a gay friend of mine saying it to me at a LIVELY BRUNCH, I don’t like hearing it. Even when I know it’s coming from an ally – and certainly when I know that it isn’t. It’s not a fun word for us to hear at this point. We’ve come too far. So maybe let’s just drop it.”

Commenting specifically on Hart’s tweets, Eichner said, “Many of us, myself included, have made jokes/tweets in the past that we deeply regret. Kevin decided to quit on his own volition. He had his reasons and that’s obviously his prerogative. But I’m not into people being permanently ‘cancelled’ over something like this.

He wrote, “To me, ‘cancellation’ is childish. I’m into conversation, not cancellation. I’m into owning up to past mistakes, acknowledging blindspots and hurtful remarks, talking through it, discussing it, learning, moving past it and making progress together.”

Why does the UK’s latest HIV prevention campaign exclude black and Asian men?