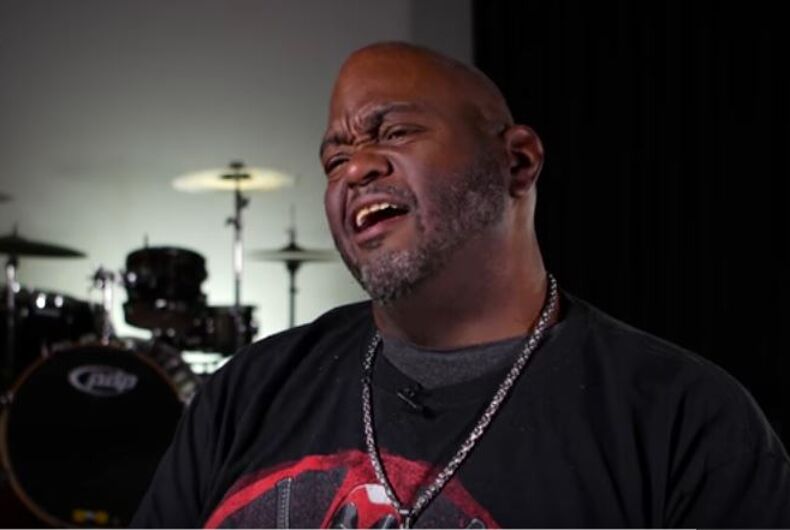 Comedian and actor Lavell Crawford, best known for his role as bodyguard and assistant Huell Babineaux on “Breaking Bad,” has some, shall we say, interesting theories on homosexuality.

He unleashed them in a new interview with VLAD TV, where he claimed he avoids making gay jokes because they are too easy, but that when he does, “it comes from my dad being gay.”

Crawford also claims to fear the “gay mafia,” pointing to the upset over Tracy Morgan saying during a stand up set that he would stab his son if he found out he was gay.

“There is a gay mafia, gay people shut down shit, man,” he said.

After saying he has gay fans, and that, “I touch on gay stuff, but I touch on it the way you’re supposed to touch on it,” while clarifying that he sees the issue as coming down to seeing it not “as gay people, but as people having feelings.”

“No matter how much they get accepted, it’s still fucking weird,” he said, making a hard turn off Ally Way.

“Now they’re trying to get their own bathrooms and shit,” Crawford claimed.

He was likely referring to transgender individuals fighting for the right to use the bathrooms matching their gender identity, not gay people.

“I got nothing against gay people,” Crawford asserted, “because strange enough, my father is gay.”

Crawford went on to say that his father came out and left the family “for twenty something years, and when he came back in our life we found out he was gay.”

He said he worried it might be hereditary, and admitted there was some anger that his father would break up the family.

“I was angry at him because that’s no reason to be away from your kids,” he said.

His father, who died two years ago, encouraged Crawford to ask questions when he married a man. Crawford recalled asking which one was the man, and, “Dad, are you pitching or catching?”

Crawford agreed with a previous VLAD TV interviewee, Boosie Badazz (formerly Lil Boosie), who said “they’re trying to make everybody fucking gay,” and that “they do it to make a monetary gain, they’re not doing it for the gays.”

Crawford said he doesn’t approve of gay characters in films like Beauty and the Beast, and in cartoons.

Crawford said he has a 6-year-old, as well as two older children in their twenties.

“Kids are impressionable,” he went on. “They’ll start thinking, ‘Oh, okay, I want to be like this.'”

He told a story of being in a store and seeing a mother ask her son if he wanted a Harley Quinn doll he had pointed out.

“Thank God the boy got a set of balls, he was like, ‘No, I don’t want no girl doll. What’s wrong with you, mom?’ And I was proud of him,” Crawford recalled.

As for the older generations, he instructed that only at 25 can you decide to be gay. Until then, he had the following advice for gay men, “Try pussy out.” He didn’t forget the women, adding, “Young ladies, try a dick out,” suggesting that they would find a good one out there.

Watch the full interview below. We will leave it up to you to decide where he is joking and where he is serious. Either way, it’s quite the viewing experience. Look for his tips on hot dog eating and his paranoia over a “gay switch.”