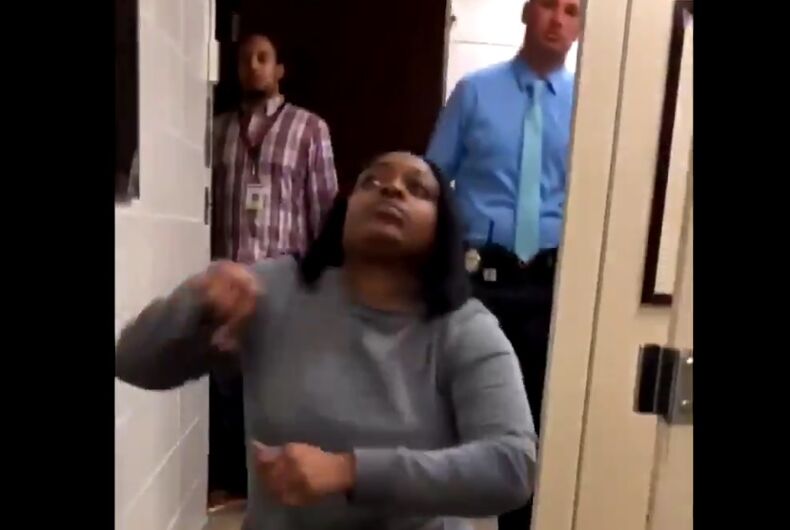 School employees were caught on video forcing open a bathroom stall that a transgender student was using.

The video, obtained and shared by Kenidra Woods on Twitter, shows a transgender teen using the bathroom while school employees at Osseo Senior High School in Minnesota try to get her out of the stall.

They reach over the stall door with a stick and use it to open the door’s latch. Two men and a woman can be seen as the door opens.

“Look at that,” the student said, who is recording the incident on her phone. “I’m using the bathroom right now and they just violated me.”

“I am so scared and violated right now. They just walked in the bathroom while I was using the bathroom for no reason.”

A transgender female student @ Osseo Senior High was ostracized by administration, violated, and put out of school for using the Girl's bathroom. 🤬

The student posted the video to Facebook, although local media is not reporting her name because she is a minor.

In a later video taken at a police station, the teen said, “They got me fucked up. I can’t use the girls bathroom? I call myself a she and not a he, OK?”

The video was then shared on Twitter by Woods.

“I’m not personally in touch with the student, but in her video, she asked for people to share it far and wide,” Woods told the Daily Dot. “So, I made it my priority to share it because it infuriated me to my core. No one should be treated in the manner she was treated.”

A girl who says she’s the trans student’s sister posted several messages to Facebook about the incident, using “he” pronouns to refer to her sister.

While she said she does not condone the school’s actions, she still blamed her sister. “My school supports my [sister] in each way they possibly can but the way [she] acts just isn’t okay.”

Later, the sister posted a message that she said was from their mother, who said that what the student in the video “doesn’t realize is that [she’s] not the only one who has been effected by all [she] has done in the last 24hrs and the rollercoaster [she] brought us on.My God I dont even know what possessed [her] to do all that. [She] was difinitely raised better than what [she’s] putting out here on this blue book. Im seriously embarrassed.”

The school has not commented on the video.