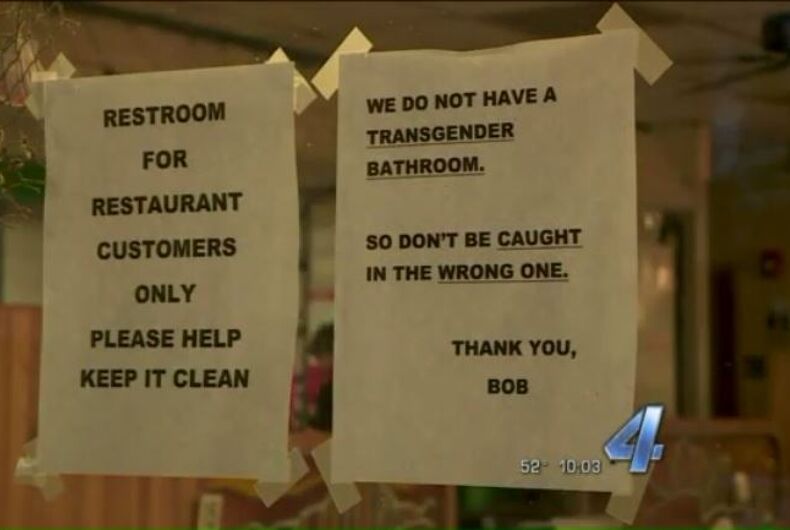 A sign at a restaurant in Oklahoma City tells transgender people to be careful that they use the right bathroom, because there isn’t one for them.

The sign has been hanging for ten months at the Steak and Catfish Barn and reads, “We do not have a transgender bathroom. So don’t be caught in the wrong one.”

“You’ve got this sign implying a threat of potential violence against somebody for going to pee. That’s not the Oklahoma standard. That’s not what it means to be American. That’s just wrong,” said Troy Stevenson, with Freedom Oklahoma. The organization got a tip and posted a picture to Facebook of the sign.

The restaurant’s owner, Bob Warner, told NBC affiliate KFOR that his sign is not a threat, but a warning.

“We have a lot of redneck guys that come in here. Truck drivers and everything. They’re big husky guys and I said ‘man alive!’ If their wife or their little girl walked in that bathroom and a man followed them in there, I wouldn’t have a restaurant,” he said. “I don’t want to see nobody hurt.”

“It’s not just that they put the sign up,” Paula Sophia Schonauer, also with Freedom Oklahoma, told NonDoc. “There’s an implicit threat to it. My mind automatically jumps to something violent.”

“Those kinds of sentiments are really telling trans people that you can’t be out in public,” said Schonauer, who is transgender. “It’s not about a restroom. It’s about being authentically who we are in public.”

Employees reported that they were getting a lot of angry phone calls since the photo made its way to Facebook.

“Lots of, ‘Fuck your restaurant.’ Just lots of profanity. Since I’ve been here, nobody’s ever said anything about it. Today was the very first time. We have lots of gay customers,” said waitress Deanna Schultz.

“We have workers who are gay, lesbian,” said Margie Warner, the owner’s wife. “We do not discriminate. We respect everybody. We have trans customers. That’s what I don’t understand.”

“I don’t have a transgender bathroom. I have nothing against them. I couldn’t tell one from the other anyway,” the owner said. “It has nothing to do with that. The only thing it has to do with is I did not want my restaurant torn to pieces.”

“God will take care of me,” he added.