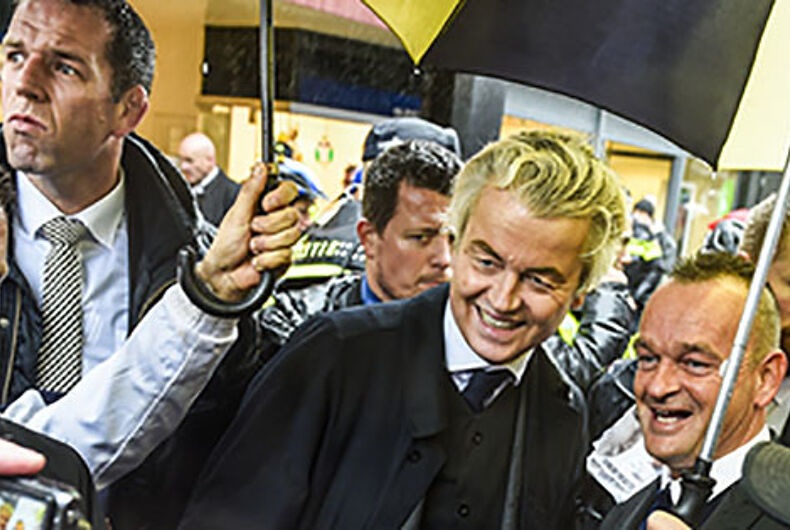 Voters in the first nation in the world to legalize same-sex marriage reelected their conservative prime minister and handed a stinging defeat to a far right wing Islamophobe, who pledged to protect The Netherlands’ LGBTQ community from Muslim terrorists.

Geert Wilders tweeted following his loss to Mark Rutte that the PM had “not seen the last of me yet!”

After early exit polls, Geert Wilders says Dutch PM Rutte 'has not seen the last of me.' https://t.co/MNdcPzy8Ud pic.twitter.com/xkMJr91NrF

Dubbed by some “The Dutch Donald Trump,” Wilders had framed part of his #StopIslam campaign as a defense of national values, including its landmark establishment of marriage equality in 2001, as BuzzFeed reported. Wilders became known as a national leader on LGBTQ rights in the years since. And he wasn’t alone in spreading anti-Muslim sentiments: even moderate politicians echoed Wilder’s message that Muslim immigrants to the Netherlands threaten gay people.

France’s Marine Le Pen is among the nationalists outside the Netherlands following Wilder’s lead in saying they are defending LGBTQ rights by opposing Muslim immigration, according to BuzzFeed.

A profile in Vox identified an openly gay predecessor as having plowed the way forward for Wilders: Pim Fortuyn was an even more ideological and flamboyant political leader.

Fortuyn was a member of the right-wing “Livable Netherlands” party whose extremist views forced his dismissal. In an interview with the New Yorker, he promised to keep out Muslim immigrants: “As far as I am concerned, no Muslim will ever come in,” he said.

“The freedom that gay people should have — to kiss each other, to marry, to have children — is exactly what Islam is fighting against,” Wilders told BuzzFeed following the attack on Pulse nightclub in Orlando, Fla. He said the mass shooting should make people realize “that we’ve imported so much Islam to the Western free countries.”

His anti-muslim views led to his conviction on charges of committing a hate crime — without penalty — in December 2016.

The Party for Freedom led by Wilders, who since 1992 has been married to a woman, Krisztina Wilders, gained 5 seats in parliament for a total of 20 seats. But it was the pro-environment parties like the GreenLeft Party that nearly quadrupled their seats, according to the Independent.

The pro-refugee Greens jumped from four seats to 14, an historic victory that turned it into the largest party on the left wing of Dutch politics for the first time.