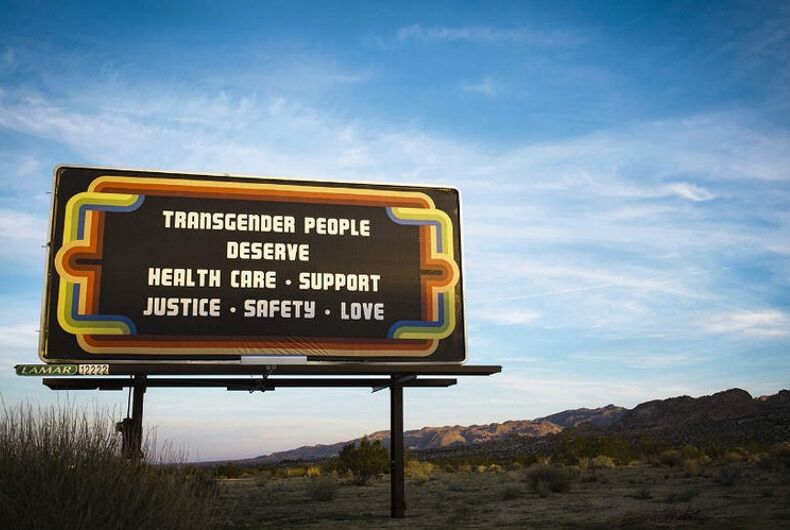 Neighbors responded to a transphobic billboard by putting up a billboard of their own.

The billboard said to ask Democratic rival Paul Cook “why he voted to allow our military funds to be used for sex-change surgeries!” The message is a reference to Cook’s 2017 vote against a National Defense Authorization Act amendment that would have banned the Pentagon from paying for health care related to gender transitions.

Donnelly also used U.S. Navy veteran Allison Hannan’s image, even though she says she never had any transition-related surgery while in the military and she does not support the Donnelly campaign’s message.

Neighbors, though, got together to do something about the eyesore.

“The way we see it, Donnelly’s billboard was an act of hate, targeting our transgender neighbors,” the group said in a statement.

“Our focus is making sure that our trans neighbors know that they are supported, appreciated, and celebrated in our community,” they said.

“Our billboard is an act of love” for their transgender neighbors.

The picture of Hannan in the first billboard was part of a photo shoot with Out magazine.

Photographer Cassidy Duhon said that she may pursue legal action because Donnelly never got permission to use the image.

Donnelly told The Desert Sun that he thinks he can use the image however he wants.

“As far as the photo on the billboards, you don’t get to make yourself the face of transgenders in the military and then complain when your image is being used,” he said, ignoring the intellectual property issue.

This GPS featuring drag queens may be fake, but you’ll want it now