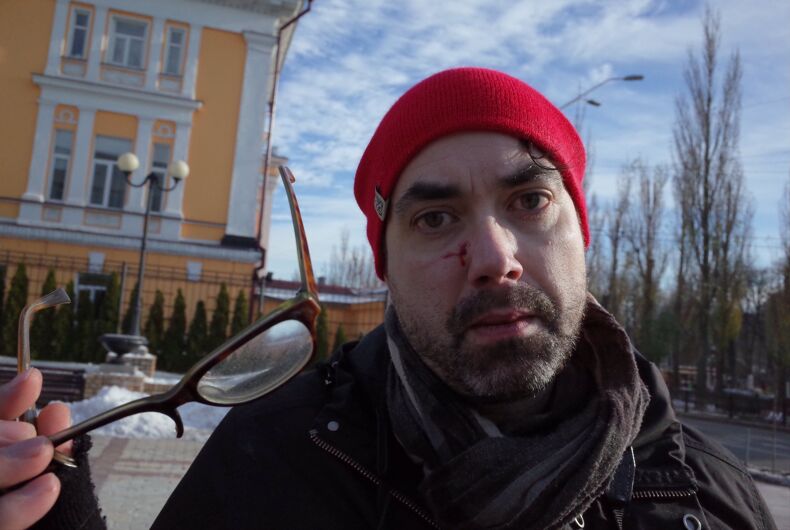 A Ukrainian Transgender Day of Remembrance observance turned violent last Sunday as far-right radicals attacked the rally, leaving at least three injured. Amongst those hurt was a Canadian journalist, Michael Colborne, who was covering the event.

Though it was originally planned for Taras Shevchenko National University of Kyiv, police forced attendees to move to the university’s metro station after far-right radicals began to move in.

“Radicals started moving towards LGBT people,” Sofiia Lapina told the Kyiv Post. “So the police started to physically shove us into the metro and told everybody that the rally has ended.”

While police claimed to protect the rally, Christopher Miller, a reporter present at the event, says police acted as aggressors, not preventing “far-right thugs” from shouting obscenities at rally participants.

“Journalists and activists were pushed & shoved by riot police into metro against our will. At one point, I was grabbed by police & prevented from reporting,” said Miller via Twitter.

Lapina said that she knew of three who were injured. Two women were hit with pepper spray, while Colborne was punched in the face. His glasses were broken and he suffered cuts to his face.

Police have labeled the attack as “hooliganism,” a term denoting implying rowdy behavior by young group of troublemakers.

Insight released a statement via Facebook calling out both the radicals and the police.

“The police, under the pressure of radical groups, stated that it is not capable of ensuring security,” read Insight’s statement. “Thus, the police are generally unable to ensure the implementation of human rights and freedoms.”

Here’s a photo that shows police officers shoving the activists into the metro turnstiles. Second shows some of the frazzled activists waiting for the train afterward. pic.twitter.com/z9kiFFCSeU

On Sunday in Kyiv, police allowed far right radicals to break up a trans rights march (forced to move 2x) to mark Transgender Day of Remembrance. Today on #TDOR, 3 brave trans rights activists held single pickets at 3 locations where march was to be held https://t.co/MgrYRFgghb pic.twitter.com/JhvXHO1l2c

Trump supporters are thrilled they have fewer friends this holiday