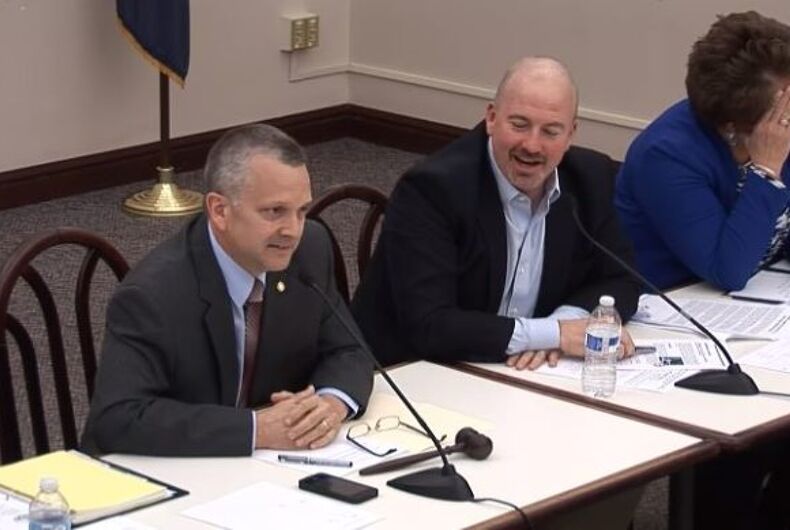 A member of the Pennsylvania state house has come under fire for attacking his opponent’s sexuality in a campaign mailer.

State Representative Daryl Metcalfe (R) is one of the most anti-LGBTQ politicians in the country. In 2014, he went so far as to try to impeach his state’s attorney general because she supported marriage equality, and just last year he ranted in the state house about how he was very heterosexual.

So it’s no surprise that he would insult his Democratic challenger Daniel Smith Jr.’s marriage in campaign materials.

In a mailer, Metcalfe showed a photo of Smith, his husband, and Pennsylvania Governor Tom Wolf and used scare-quotes around the word “husband.”

When asked about the scare-quotes, Metcalfe said, “Because that’s not what I’m calling him. That’s what he’s calling him.”

“Marriage is between a man and a woman,” says Metcalfe.

Related: Out politician Brian Sims alleges there are over a dozen closeted legislators in Pennsylvania

“He should know that that’s the law of the land,” Smith said. “That’s where we are now. There’s no quotes around it, he’s my husband.”

The same mailer says that Smith has been endorsed by “liberal gay activist groups,” as if that’s a reason to vote against him.

Metcalfe said that it’s important for people to know that Smith is married to a man.

“The majority of people that believe that marriage is between a man and a woman, I think some of them will certainly make a decision on what he’s advocating for and who’s supporting him,” he said.

While there’s no polling on Metcalfe’s house district, a 2017 PRRI poll found that only 27% of people in Pennsylvania oppose marriage equality, while 64% support it.

Last year, when another representative briefly placed his hand on his sleeve, Metcalfe had a bizarre gay panicky outburst.

In 2014, Metcalfe led what Democrats called a “kangaroo court” to impeach Attorney General Kathleen Kane for refusing to defend the state’s same-sex marriage ban in court.

The hearing involved 11 Republicans but no Democrats, and Kane was not allowed to testify.

“I was seeking out people who would talk about her violating the law and the Constitution,” Metcalfe told reporters to defend his hearing.

“I’m not interested in somebody trying to create a facade to try and distract people from understanding.”

Pennsylvania never had a constitutional amendment that banned marriage equality, but in 2011 and in 2013 Metcalfe introduced one in the state house.

In 2004, Metcalfe joined other state legislators in a lawsuit against a gay couple that tried to get married but was turned down.

A teen sex abuse victim died in 1982. Now the cop who investigated the death is a suspect.