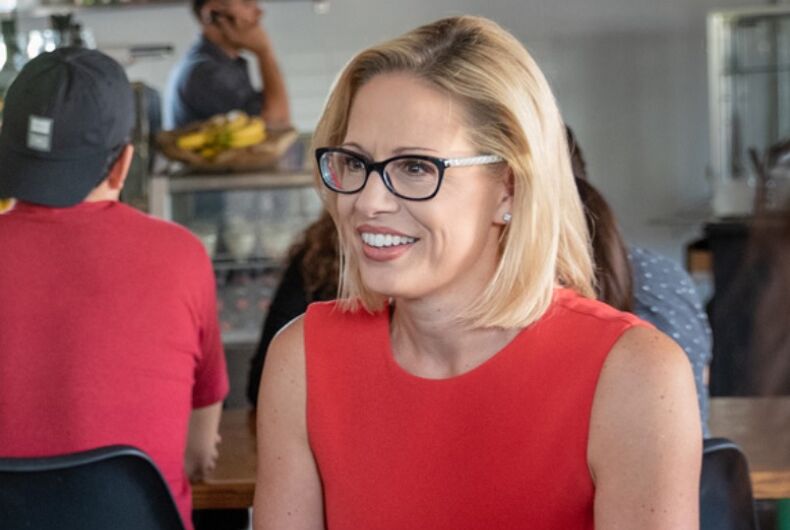 After a contentious week of counting votes, Sinema won the race with 1.7% more votes than Republican candidate Martha McSally.

“Arizonans had a choice between two very different ways forward: one focused on fear and party politics and one focused on Arizona and the issues that matter to everyday families,” Sinema said in her victory speech. “I am so honored that Arizonans chose our vision.”

McSally has conceded the race.

“I just called Kyrsten Sinema and congratulated her on becoming Arizona’s first female senator after a hard-fought battle,” she said in a video.

Not only is Sinema Arizona’s first female U.S. Senator, she is also the first out bisexual U.S. Senator in the country. Along with Tammy Baldwin (D-WI), there will be two LGBTQ members of the U.S. Senate next year.

“An LGBTQ woman winning a U.S. Senate seat in a state that voted for Trump is a game-changer, both for the LGBTQ community and the Democratic party,” said Annise Parker of the LGBTQ Victory Fund. “Kyrsten’s victory makes clear that an LGBTQ candidate who listens to voters and prioritizes their issues can win elected office anywhere – blue state or red state.”

“It also signals to the Democratic party that nominating more LGBTQ candidates for high-level positions should be a strategic priority, because their openness and authenticity resonates with independent voters.”

Next year, the Senate will have 47 Democrats (and senators who caucus with the Democrats) and 51 Republicans. Two races have not been called yet: Florida and Mississippi, and the latter will have a runoff later this month.

Sinema is the first Democratic U.S. Senator from Arizona since Dennis DeConcini retired in 1995.

“Congratulations to Kyrsten Sinema and Arizona Democrats for such a stunning victory,” said DNC Chair Tom Perez. “Arizonans went to the polls last Tuesday looking for bold new leadership, and that’s exactly what they’re going to get with their first-ever female senator and our nation’s second openly LGBTQ senator.”