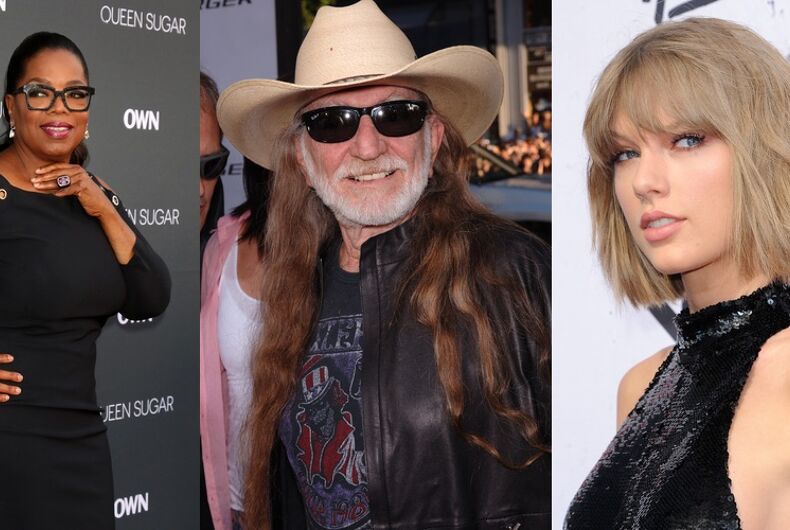 Oprah Winfrey, Willie Nelson, and Taylor Swift are helping Democrats get out the vote in the midterm election.Photo: Shutterstock/composite

The 2018 midterm elections may see record voter turnout to put Democrats in office nationwide to serve as check on Donald Trump and Republicans.

Some of your favorite celebrities are using their platform, hitting the airwaves, and taking to the streets to get out the vote for Democrats this election year.

More than a dozen women entertainment industry legends — including Cher, Laverne Cox, and Lily Tomlin — joined forces in a new video encouraging women to vote in the midterms. The video was directed by Jodie Foster.

Gay comedian Billy Eichner has teamed up with Funny or Die to launch the “Glam Up the Midterms” campaign to get millennials to the polls.

Some celebrities are literally walking their talk in this election.

If you’re a voter in Georgia, you may find Ron Burgundy himself on your doorstep. “Anchorman” star Will Ferrell has been spotted going door to door canvassing voters in the state to get out and vote for Democratic gubernatorial candidate Stacey Abrams.

Actor/rapper Common also joined Abrams for her Souls to the Polls march to unite faith-based communities in Georgia to vote early.

Thank you, Common, for helping us lead Souls to the Polls today.Georgia sits at a crossroads. We are fighting for the soul of our state. But in 8 days—with all of us pitching in to get out the vote—I know that we will march forward.Vote early this week:staceyabrams.com/vote

None other than media queen Oprah Winfrey herself is headed to Georgia to hit the campaign trail with Abrams. Winfrey will knock on doors and hold two town halls with Abrams.

Hollywood legend Jennifer Lewis added her powerful voice to the rising chorus urging each of us to “get your ass out and vote.”

And when the “mother of Black Hollywood” tells you to do something, you’d better hop to it.

Direct Primary Elections Today. Get your ass out and VOTE!!! Do your part.

Posted by Jenifer Lewis For Real on Tuesday, June 5, 2018

Hello, Florida! I’m going to be spending the day volunteering with your next Governor, @AndrewGillum.

Republicans who hadn’t been paying attention to Nelson’s longstanding progressive politics were outraged.

Former First Lady Michelle Obama has enlisted a bevy of her celebrity friends — including Lin-Manuel Miranda, Chris Paul, and Janelle Monáe — in her When We All Vote campaign.

The campaign aims to increase voter turnout by registering Americans to vote, especially youth, and urging Americans to create their own “vote squads” to encourage others to register and vote.

Pop star Taylor Swift recently broke her political silence to weigh in on the midterm elections. Swift took to social media to declare her support for two Democratic candidates and align herself with the fight for LGBTQ rights and gender equity.

While Swift’s post sparked howls of outrage from the alt-right, it also caused a spike in voter registration.

“Will & Grace” cast members Eric McCormack, Debra Messing, Megan Mullally, and Sean Hayes recorded a video speaking directly to their audience about why it’s important to vote on November 6.