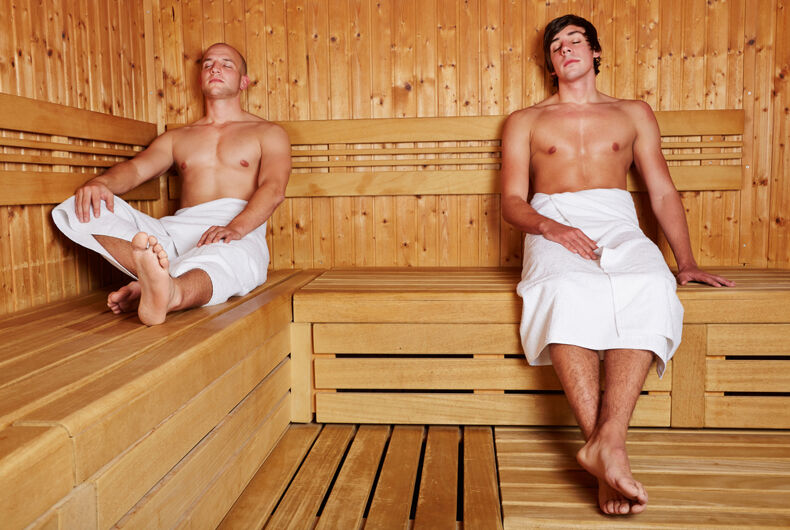 Two men in a sauna.Photo: Shutterstock

A sex friendly bathhouse in London ejected a transgender man for not having a penis.

The man in question, a 26-year-old trans man who gave the pseudonym “Jason Smith” to protect his identity visited Sailors Sauna, located in the Limehouse district of East London, with a friend on Monday night.

Sailor’s Sauna advertises itself as a “social club for men interested in other men.”

Smith was initially reluctant to visit the place, as while he describes himself as “very passable,” he has not had bottom surgery.

“I was a little nervous about being trans as I haven’t had bottom surgery but was reassured (by a friend who accompanied him) there would be no issue,” Smith said to Gay Star News. “So I thought I’d double check on the website.”

The website for Sailors Sauna provides little information beyond a handful of photos, their address, prices, and hours, and a page or two on special event nights. There are no pages with rules, expectations of conduct, or – most importantly – who is or isn’t allowed on premises.

Smith and his friend visited on Monday night at around 9:30 p.m. While in the jacuzzi, a staff member approached the pair and asked him to leave.

“A staff member came over and requested I leave,” said Smith. “I was not allowed because of my genitals.”

Smith explained his transgender status and shared his identification card, which lists him as male. He also noted that their website doesn’t list any rules barring transgender people from Sailors Sauna.

The staff member replied that Sailors Sauna was a “male space,” telling Smith that it would be find if he had “tits and a dick,” but that his current anatomy was unacceptable.

The Sauna may be in violation of the Equality Act of 2010, which would protect Smith from discrimination. The law doesn’t require any surgical procedures to cover transgender people.

When Smith clarified that with the staff member, they claimed that the rule wasn’t up to Sailors Sauna, but the Tower Hamlets council.

Smith did leave the premises and was refunded his entrance fee.

A spokesperson for Sailors Sauna said in a statement, “On Monday evening, a customer informed a member of staff that a woman was using the venue.”

“I understand that the gentleman was male however his physical gender was different and as a customer had already stated that a female was using the venue, I explained that I would need to clarify with the council,” the spokesperson added.

Tower Hamlets council clarified with Sailors Sauna that they would not be in breach of their license by allowing a transgender man on their premises.