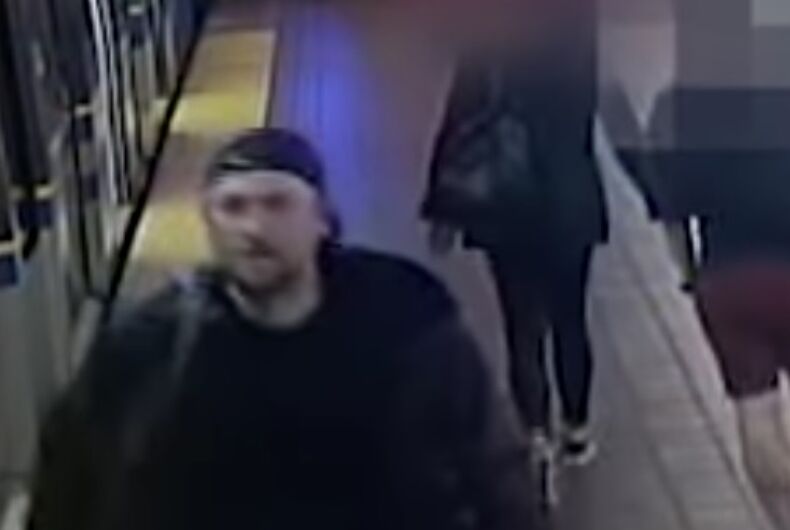 A suspect has been arrested in connection to an attack on a gay couple in a SkyTrain car in Vancouver, and now another gay couple says that they were attacked by the same person.

In September, a gay couple got on the SkyTrain in the afternoon. As they were boarding, someone kicked one of them and then stood up.

The victim crouched down while the attacker raised his hand and yelled obscenities, according to the police report. Someone else in the car pulled the attacker away.

Then the assailant got aggressive again, and the husband pulled him away. The attacker punched the husband in the face.

He kicked one of the victims in the stomach, spit in the other’s face, and left at the next station. He shouted “profanities and homophobic remarks” at the couple as he left.

Security cameras filmed the assailant as he left the train, and police released video last week in order to identify him.

This past week, Vancouver resident Rylan Friday said that he and his partner were holding hands in the SkyTrain in June when a man shouted at them: “Hey guys, you’re being fucking offensive. There’s a fucking kid here.”

Friday said that the man used an anti-gay slur as well. He and his partner got off the train, worried that they were about to be attacked.

Friday believes that this is the same man who attacked the gay couple in September.

Police announced that they arrested a 36-year-old male suspect, but they didn’t give any other details. They still want witnesses to come forward.

Transit police Sergeant Clint Hampton said that the suspect could be charged with assault.

A drag king in Hawaii performed in blackface. In 2018.