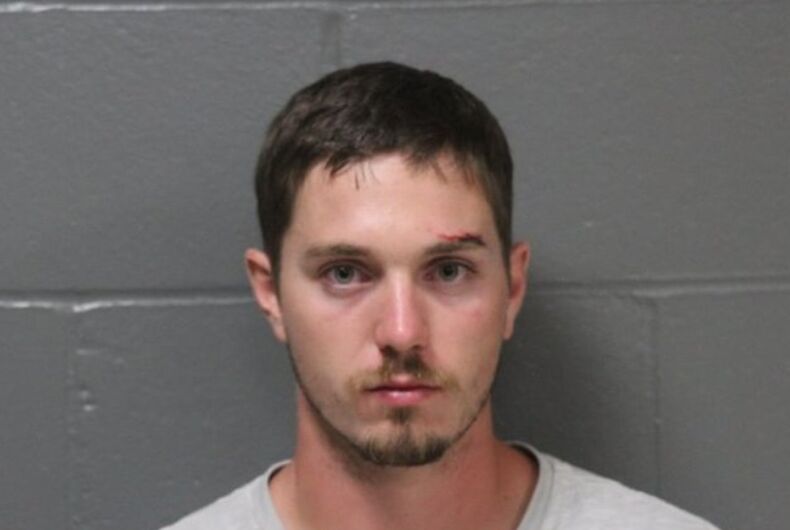 According to investigators, Allen Loftis, 22, assaulted three different people this past Saturday at Shady Gators, a bar on Lake of the Ozarks.

Security at the bar said that Loftis started a fight with three men who were dancing together, who all say they’re straight. One of the victims was wearing a wig, a see-through cropped T-shirt, and leopard print pants.

During the altercation, Loftis pulled the wig off of the man who was wearing it, and punched another in the throat. He allegedly used a homophobic slur when he attacked.

When someone called the police, Loftis started to leave. The third victim confronted him in the parking lot, and Loftis punched him in the mouth, chipping a tooth.

When he was taken to the county jail, Loftis said that he “did not let gay stuff” go on.

“When they brought him in, the suspect, for questioning, he admitted that he didn’t care for gays, and he shouldn’t act that way,” Camden County Sheriff Tony Helms said.

Under Missouri law, it doesn’t matter if the victims are actually gay – what’s important is that Loftis was motivated by homophobia. In many states, the crime would not be classified a hate crime if the men aren’t gay.

“It’s not legal to attack somebody for their beliefs or how they live their life. You just can’t do that,” Helms added. “If these guys chose to be having silly fun or if they are truly gay, that shouldn’t be anybody else’s business but their own.”

The probable cause statement says that Loftis “demonstrated hatred towards the LGBT community” and “showed no remorse but instead attempted to justify his actions.”

Loftis is being charged with three counts of assault with hate crimes enhancements and one count of disturbing the peace. He is currently out on a $75,000 bond.

Vandals deface a plaque commemorating gays who were executed in France