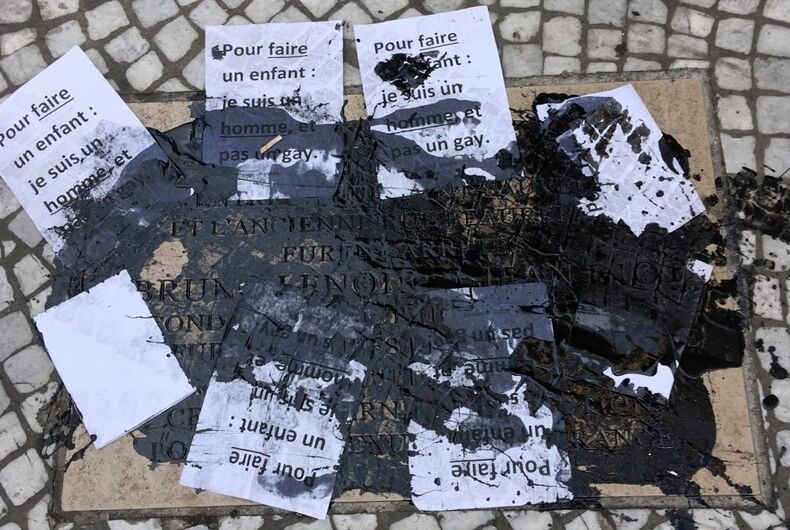 Anti-gay vandals defaced a plaque in Paris, right in the middle of the Gay Games.

This week, the Gay Games 2018 are taking place in Paris. Over 12,000 people are expected to attend from 91 countries, including many countries where homosexuality is still punishable by death.

But homophobia isn’t over in France. Paris’s mayor, Anne Hidalgo, tweeted an image of a plaque that was defaced with anti-gay literature.

The plaque, found at 67 rue Montorgueil, commemorates Jean Diot and Bruno Lenoir, the last two people to be sentenced to death in France for being gay.

In the picture Hidalgo tweeted, the plaque is covered in black paint and flyers that say: “To make a child, I must be a man, and not a gay.”

“I am shocked by this new, shameful demonstration of homophobia,” Hidalgo tweeted. “This act will do nothing other than reinforce our determination to fight against discrimination.”

This past May, vandals set fire to flowers that were left on the plaque.

Lenoir and Diot were put to death in 1750, several decades before the French Revolution. According to police testimony against them, they were caught at around 11 p.m., engaging in “indecent” and “reprehensible” behavior. They were arrested.

During their interrogation, Lenoir said that it was Diot’s idea to have sex, and Diot said that he found Lenoir drunk and he was just trying to help him.

They couldn’t afford lawyers, were convicted of sodomy, and were sentenced to be burnt alive in public.

Homosexuality was legalized in France during the revolution in 1791 with the adoption of the first French penal code. The Code attempted to separate civil law from Catholic law, making France the first country to legalize sodomy in the West.

IRS recognizes a lesbian witches ‘church.’ But is it a sneaky attack on trans rights?