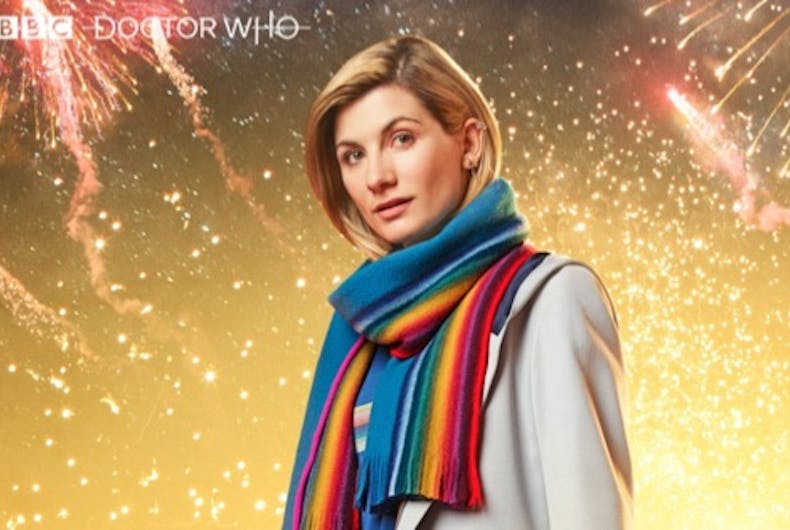 Thanksgiving has just ended but Doctor Who and the BBC have fans, especially LGBT and ally fans, awaiting New Year’s with great joy. A sneak peek of the show’s New Year’s episode has some fans wondering if the Doctor is going to come out of the closet.

More Details Revealed – As the New Year begins, a terrifying evil is stirring, from across the centuries of Earth’s history. As the Doctor, Ryan, Graham and Yaz return home, will they be able to overcome the threat to planet Earth? #DoctorWho . pic.twitter.com/NVJtr9fidS

The show’s Twitter account posted pictures of Jodie Whittaker’s Doctor wearing a rainbow scarf with fireworks behind her. Some fans have read the look as a hint that the 13th Doctor will start a queer relationship with her colleague Yaz. This possibility has previously been implied by characters in the show.

Related: Doctor Who would have to wait years to legally transition to a woman in the UK

Others think the scarf is a throwback to an old look. Tom Baker’s fourth Doctor also wore a long-striped scarf comparable to the one worn by Whittaker’s version of the character. While there is no suggestion that the scarf is anything other than an accessory, many fans believe it is a clue about the Doctor’s future.

Just looking at the new images of the thirteenth Doctor for the New years special. If I didn’t love her enough already!!! 😍😂 The scarf is a nice touch and homage.#DoctorWho #JodieWhittaker pic.twitter.com/FkdUHauOnx

#wcw😍 In love with Jodie Whittaker as the Doctor But the question I have as a queerdo: does the fact that the Doctor can regenerate into multiple genders make the Doctor genderqueer? Is this a new the queer sci-fi icon?! #doctorwho #jodiewhittaker #lgbt #queer #womancrushwednesday #geek #gnc #genderqueer