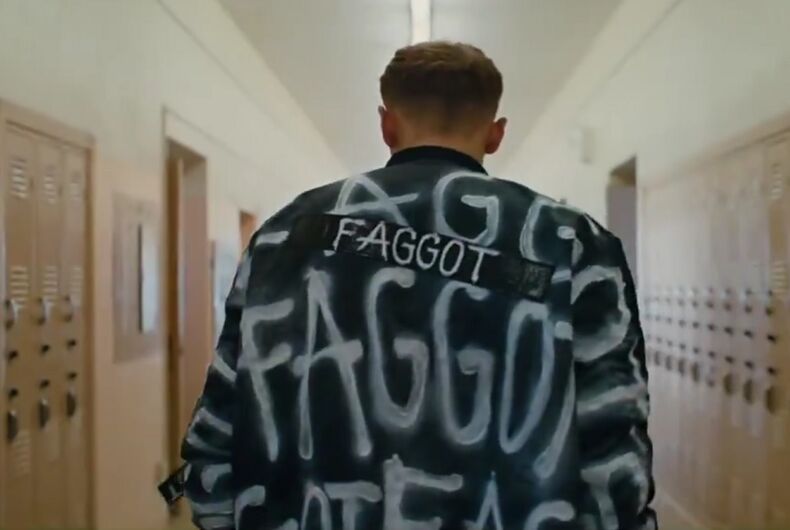 The fashion brand Diesel is selling a jacket that has the word “faggot” written all over it.

For 350 GBP (about $450), you can buy a jacket made from “shiny technical satin” that has hate speech all over it.

The jacket is part of Diesel’s “Ha(u)te Couture” line, which includes several garments with negative comments about Diesel written on them, like “Diesel is dead” and “Not cool anymore.”

Other than two women’s T-shirts that say “Slut,” the “Faggot” jacket is the only garment in the Ha(u)te Couture collection that has actual hate speech.

The other 76 products just show negative comments about Diesel itself or vague insults like “The bad guy.”

So how did Diesel get here, using hate speech to sell clothes?

The Ha(u)te Couture collection is part of an ad campaign that featured a few celebrities, like Nicki Minaj and Tommy Dorfman from 13 Reasons Why.

In an ad, Dorfman, who is gay, wore the “faggot” jacket.

The collection’s tagline is “The more hate you wear, the less you care.”

“I don’t think Diesel gets to ‘reclaim’ this term for our community,” author Phil Stamper said. “It’s still pretty divisive, and brings up a lot of trauma for queer people.”

In a statement, Diesel said: “Every individual cast within the campaign relates personally to the issue itself. To bring awareness to the wider issue, each chose a phrase that they wanted to wear proudly with the goal of empowering others to take a stance. Together, Diesel and Tommy Dorfman use this as a platform to disempower the haters and show the more hate you wear, the less you care.”

But the fact that “Faggot” appears in a collection that’s almost entirely about negative internet comments goes to show that they don’t really take homophobia and hate speech seriously already.

Maybe they should try caring more, not less?

What does last night’s election mean for the trans community?