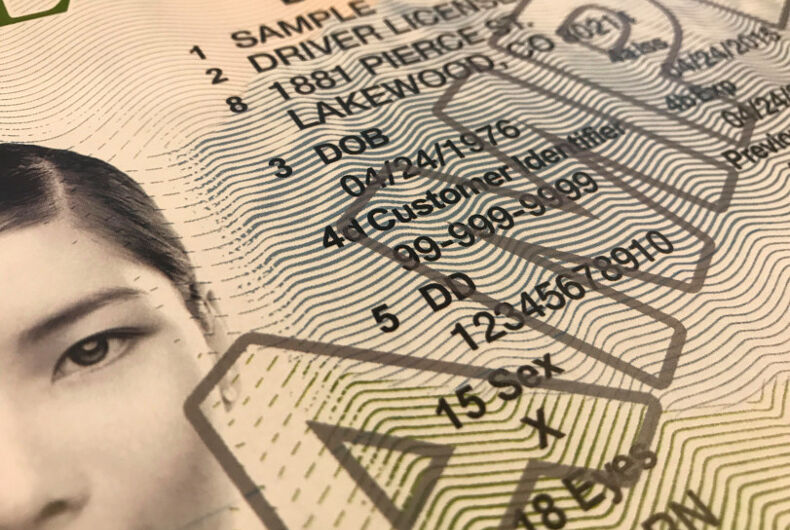 A close up of a sample Colorado drivers license with an "x" as the gender identifier.Photo: Colorado Department of Revenue

Colorado has become the latest state to offer a third gender option on government ID cards. Now residents will be able to choose X if they are non-binary.

The Executive Director of Colorado Department of Revenue “has found that adoption of these rules is necessary for the preservation of public health, safety and welfare” according to an FAQ issued by the department.

“This is an important step for the state of Colorado that the state documents reflect our values. People are people no matter their sex identification,” DOR Executive Director Michael Hartman told the Denver Post.

They cite a recent court case where a federal judge “ordered the U.S. Department of State to issue a passport with an alternate sex designation” to a Colorado resident. They also point to a different case where a minor “sought to have the state’s birth certificate policy declared unconstitutional because it does not allow a person to update the sex marker on their birth certificate unless their sex has been surgically changed.”

That case was settled out of court.

“Over the past decade, Colorado has been a leader in advancing LGBTQ equality, and today is no exception. Having a vital document like a driver’s license that correctly reflects your gender is such a basic, yet crucial component to living your everyday life. Yet, non-binary Coloradans would have to choose between a ‘M’ or ‘F’ designation that may not match their gender identity,” One Colorado  Executive Director Daniel Ramos said.

“This has opened up non-binary individuals to being forced to explain their gender identity when it’s nobody’s business but their own. The ‘X’ designation is an important step in the right direction.”

Having a driver’s license that accurately reflects who you are is something many of us take for granted. Now with this change in policy, non-binary Coloradans will have the same freedom and opportunity to have this vital identification that truly reflects who they are,” Ramos concluded.

The state will start issuing the updated ID cards on November 30.

Once again, God told Michele Bachmann he’s just not that into her