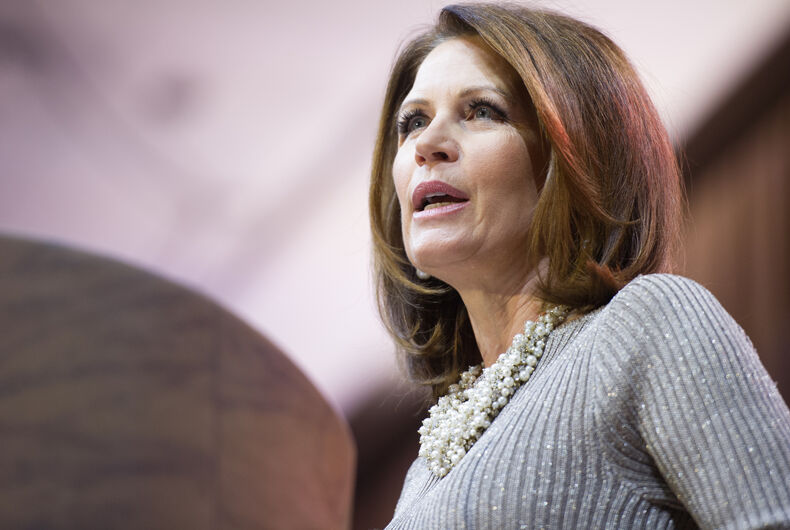 Poor Michele Bachmann… She really wants to be God’s chosen politician, but He always seems to think differently.

The bombastic former Republican Congresswoman and failed presidential candidate is infamous for her ridiculous conspiracy theories and affiliation with hate groups, but she still thinks God is guiding her to victory in all things – despite losing everything.

On election night, Bachmann was providing political commentary on televangelist Kenneth Copland’s Believers Voice of Victory network. At one point, she led her fellow commentators in prayer after it was forecast that Democrats would win control of the House of Representatives.

“Control of the House is still up for grabs,” she prayed. “So Lord, we have been trusting you and we are praying and we are praying by faith, oh God, believing for these seats. We do not accept defeat that has been already forecast by some of these networks.”

“What we accept is your will and your sovereignty and that’s what we pray, Lord. We come in alignment with your will for the House and the Senate and for a government that reflects your kingdom and your values and your biblical, Father, precepts.”

God apparently decided that the party who doesn’t attack immigrants, cares for the poor, respects civil rights, and feeds the hungry is more to his liking.

When Bachmann announced she was considering running for the Senate, she said she had asked God for his approval. He didn’t give it then either.

“I fulfilled the calling that God gave me,” Bachmann told equally infamous televangelist Jim Bakker, referring to her unsuccessful 2012 presidential run. “So the question is, am I being called to do this now? I don’t know.”

Related: God told Michele Bachmann not to run for Senate, but he told a gay man ‘yes’ apparently

A month later, Bachmann admitted that her savior had not given her a thumbs up.

“It became very clear to me that I wasn’t hearing any call from God to do this,” she told religious right radio host Jan Markell.

A professor was told stop denigrating a student. Now he’s suing because God told him to do it.