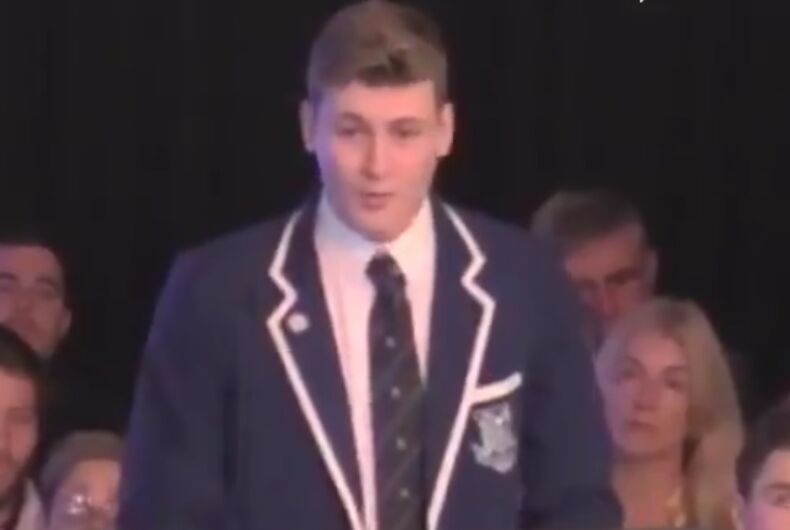 A student came out to more than 1500 of his Catholic school classmates during an assembly.

Finn Stannard, 17, told St. Ignatius’ College in Sydney, Australia: “I have been working towards this speech for four years.”

And he came out.

This is the moment a gay student at one of Sydney’s most elite Catholic schools – that boasts former prime minister Tony Abbott and Barnaby Joyce among its alumni – stood up in a packed assembly hall of more than 1,500 students and came out pic.twitter.com/NyZxffFBmr

“Announcing yourself to the world is pretty terrifying,” he said. “What if the world doesn’t like you?”

“Life was easier living as the straight eldest son. I had spent so long behind the façade of a confident, heterosexual man that I wasn’t sure if I knew how to be me.”

He received a standing ovation from his fellow students.

Stannard said that he was inspired to come out by the success of last year’s national referendum on marriage equality in Australia.

“When the results of the plebiscite came out, that’s when I knew that I could do the speech and it would be alright in the end,” he said.

In his speech, though, he said that the bullying and homophobia he experienced at school – “countless rumors and unpleasant jokes” – made him think that he would never be accepted by his peers. He even called out the pejorative use of the word “gay.”

“It was these, seemingly small, yet cumulative experiences that made me feel like I would never be accepted,” he said.

A few months later, Stannard took his boyfriend to the school dance.

The White House Christmas decorations are the laughingstock of the internet

Here are the 15 dumbest theories about what makes people transgender