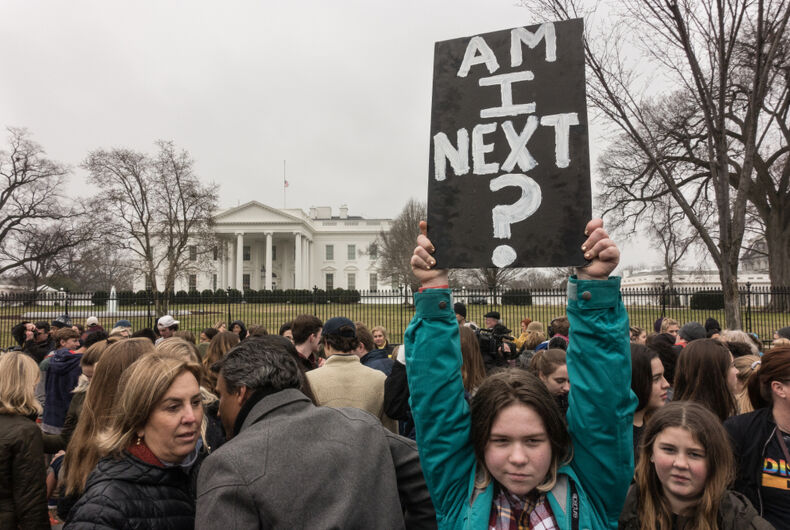 A “lock down” drill discovered a flaw that could be fatal to a transgender student in Virginia.

The drill at a Stafford County Middle School, designed to prepare children in the wake of a nationwide rash of school shootings, took place during the school’s physical education class.

In these instances, students go to sex-segregated locker rooms.

The student in question was forced to sit on the school’s bleachers while teachers debated which locker room was appropriate for the student.

“The student was forced to watch the adults charged with her care, debate the safest place (for the other students) to have her shelter,” read a Facebook post from a local LGBTQ advocacy group, Equality Stafford. “During this debate, she was instructed to sit in the gym with a teacher until the drill was complete, away from her peers and identified as different.”

“After some additional debate, she was made to sit in the locker room hallway, by the door away from her peers,” the post continued.

This is not the first time this school district has wrestled with the facilities this student should enter. In 2015, when this child was in the fourth grade, she was initially allowed to use the girls’ restroom.

Parents of other students attending classes at the transgender child’s school felt that their children would somehow be at risk, and pushed the county school board to do an about-face.

Now the results of that decision have come to roost, potentially stranding the child to the whims of a school shooter.

In response to outrage over this lack of concern over the safety of the student in question, the school’s spokesperson, Sherrie Johnson, released a statement.

“The new superintendent has requested a review of all protocols and procedures to ensure that all children are treated with dignity and respect,” said Johnson. “We take such matters very seriously and they will be addressed. The welfare of all students is of the utmost importance for SCPS.”

The spokesperson did not address the dignity and respect afforded to the transgender student in question, who would apparently have been left in harm’s way had this not been a drill.

A protest is planned for next Tuesday’s school board meeting by concerned parents and others.

Equality Stafford is pushing for training all staff on LGBTQ issues, amending the school’s anti-discrimination policies to include gender identity and sexual orientation, and forming GSAs in the local middle and high schools.