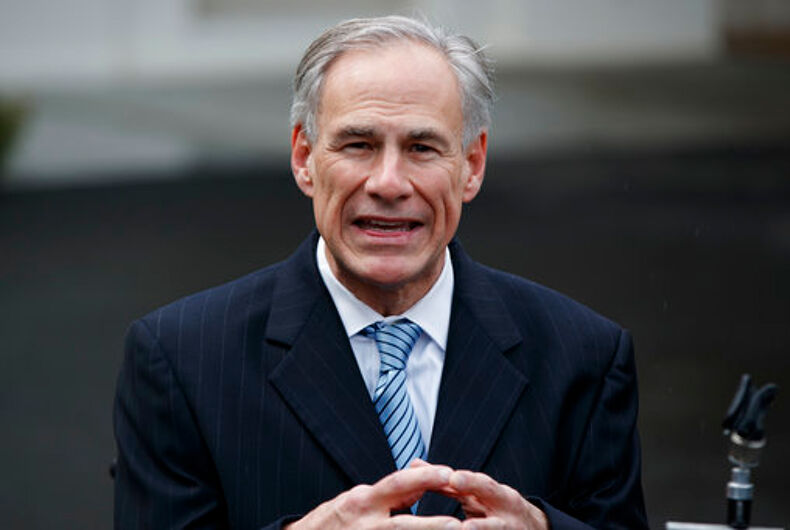 Texas Governor Greg Abbott says that he is no longer championing bills to restrict transgender restroom access in the state.

During a debate with Democratic rival Lupe Valdez, last year’s special legislative session was brought up. One of the issues during that session was a pair of “bathroom bills” designed to restrict transgender access to public accommodations in the state.

Asked if he would be doing the same this year, Abbott weaved, spending much of his time in response to the question focusing on other agenda items of his, including cutting property taxes, aiding veterans, and “arresting dangerous gang members.”

“It’s not on my agenda,” said Abbott when he was pressed on the issue. He was, however, not willing to say that he would or would not sign such a bill, saying, “I will not sign hypothetical bills.”

Valdez is his democratic rival for the Governorship, and a former sheriff of Dallas County. She is also lesbian.

“He listed gang members and several other things,” said Valdez in rebuttal. “I’m almost wondering, does he mean that transgenders (sic) are gang members, because that is what he was going after.”

“There is a continual fear-mongering, and I don’t believe in laws that start out in fear,” Valdez added. “We need to stop the fear-mongering in our laws and get down to what really matters to all Texans.”

“Greg Abbott is lying,” said Roberts. “Oppressing transgender Texans is still on their hate menu, and Sen Lois Kolkhorst made it clear they are going to try to push ‘bathroom bill’ legislation in the 2019 session despite the fact that the Texas trans people, Texas businesses, leaders and the chamber of commerces in the cities of Austin, Dallas, Houston and San Antonio have emphatically stated they don’t want this unjust legislation.”

Abbott enjoys a commanding lead over his rival, and has over $50M more than his opponent. Nevertheless, the push in 2017 for a bathroom bill by Abbott proved to be unpopular, particularly after North Carolina’s similar HB2 received a great deal of pushback from businesses and others.

The fallout from North Carolina’s bill also helped lead to the loss of that state’s Governor, Pat McCrory, to his democratic rival, Ray Cooper. It is unlikely that Abbott would like to follow in McCrory’s footsteps.