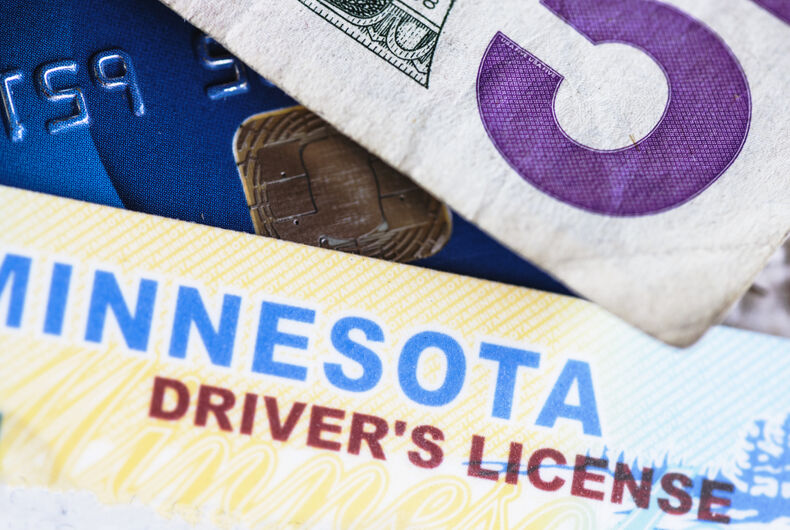 H. Jonathan Goltz was excited. They had heard a rumor, and ran to their nearest Minnesota DMV office to confirm it. After waiting in line for an hour and a half, they walked out of the DMV office with a temporary license in their hand — a license that listed them as non-binary.

Goltz came out as transgender in 2005, and had their ID paperwork changed to male, but “I still didn’t feel completely at home calling myself a guy. To be honest, I always felt more at home somewhere in-between,” they told LGBTQ Nation.

They believe themselves to be the first person with a non-binary driver’s license in St. Paul, if not the state.

Goltz was tipped off by friends at OutFront Minnesota about DMV software upgrades that made the option possible. The upgrades were to bring the state into compliance for RealID, the enhanced licenses approved in the wake of 9/11.

Aside from the expected long lines at the DMV, the process was simple.

“All it took me was a note from my doctor that confirmed me as a candidate for bottom surgery (it was from 2013), which listed the steps I’d taken to get my birth certificate changed from F to M, and my name changed,” said Goltz.

The Driver and Vehicle Services (DVS) division has explained further to the Minneapolis Star-Tribune that applicants don’t need to provide any specific documentation to have an “X” on their identification. At currently the DVS website still requires a “medical certification” to get gender changed on licenses.

“When I was holding my new license there in the DMV, I leaned against the nearest table, still totally in shock, then called my closest nonbinary friends (I’m kind of a magnet for them; I know dozens of them just here in the Twin Cities) and said, ‘I’ve got the first X license in Saint Paul’ and listened to them scream. Then I’d scream back. They’d scream again. Back and forth, just this chain of bubbling joy, because we’ve all wanted this kind of validation for so, so long.”

Only three states have previously allowed you to signify a gender other than male or female on a driver’s license: Oregon, California, and Maine. This makes Minnesota the fourth.

Goltz feels it opens the doors for many others in Minnesota. “This news today means people can finally declare themselves to be more than parts, not just one half or another — to be a whole person,” said Goltz, “and I couldn’t be happier!”