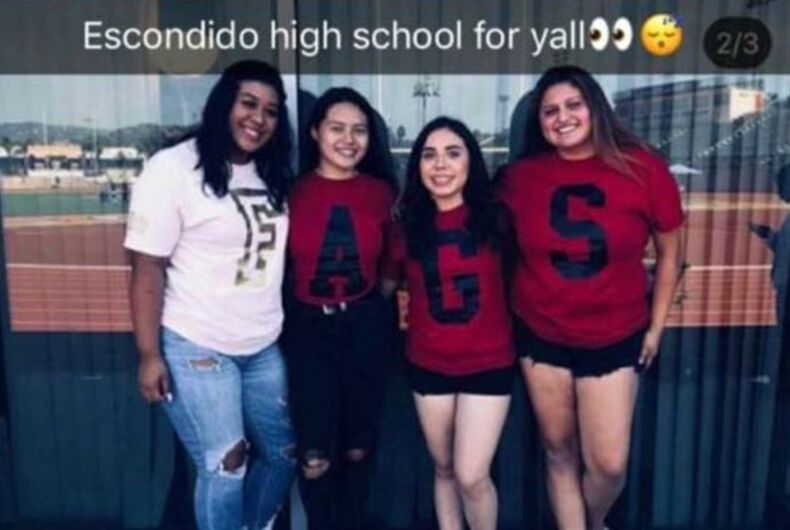 Escondido High School students thought it was a good idea to spell out racist and anti-gay slurs with their t-shirts.Photo: Twitter

Seniors at Escondido High School, in California are facing repercussions for a pair of photos of themselves wearing lettered T-shirts to spell out racist and homophobic slurs.

Pictures of the students spelling out “Fags” and the N word circulated on social media in the wake of the school’s annual senior barbeque. At the event, it is traditional for the students to wear shirts with letters on them, and spell out words with their friends.

Official photos taken at the event require that phrases be agreed upon beforehand, but this doesn’t stop students from informally getting together afterwards and creating their own, offensive images.

Representatives of the Escondido Union High School District have responded to the furor over the photos, telling KGTV in San Diego, “today, during a senior event on campus approximately 10 students made a poor decision to participate in an activity that is not aligned with Escondido High School’s culture, values or history.”

Principal Dr. Adriana Lepe-Ramirez is promising that the school will work with students and staff to, “ensure a respectful and safe environment is maintained throughout our campus.”

The school is also working with the Escondido Police Department and others to review the incident.