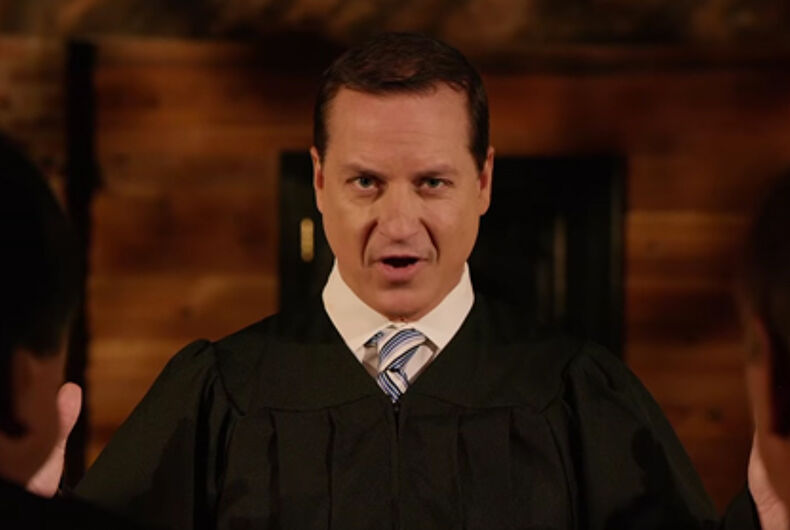 “Repeat after me, I Mike Madigan, take you JB Pritzker as my unlawful partner in destruction,” intones the minister in the 30-second attack ad. “To raise property taxes property takes, corrupt government, and bankrupt Illinois’ future.

The ad ends with the minister, staring directly into the camera, saying, “By the power vested in me I now pronounce Illinois f***ed.” The final word is beeped out in the ad, but the mouth movements make the language clear.

The use of a same-sex marriage seems set to market to conservative votes who will view it and the “unholy union” name as aligning with their values.

Rauner has made it a cornerstone of his messaging that having both Pritzker and Madigan in power together in Illinois will lead to higher taxes and more corruption, but this ad from the organization “Citizens for Rauner, Inc.” takes his message to a new and disturbing level.

“Look, Bruce Rauner is desperate with fourteen days left in the campaign, he’s willing to say anything, do anything to try to win re-election,” said JB Pritzker to WLS AM 890 in Chicago.

Rauner, who has officiated at same-sex marriages in the past, was unapologetic for the tone of the advertisement, choosing instead to reinforce his political message. The only thing he was willing to walk back, albeit slightly, was the use of the f-word in the advertisement.

“I can say very clearly that Pritzker in office with Madigan, the people of Illinois are abused, or screwed to use that word, I’ll use that word,” said Governor Bruce Rauner to WLS.

View the advertisement below:

Donald Trump is no patriot. He’s a nationalist.