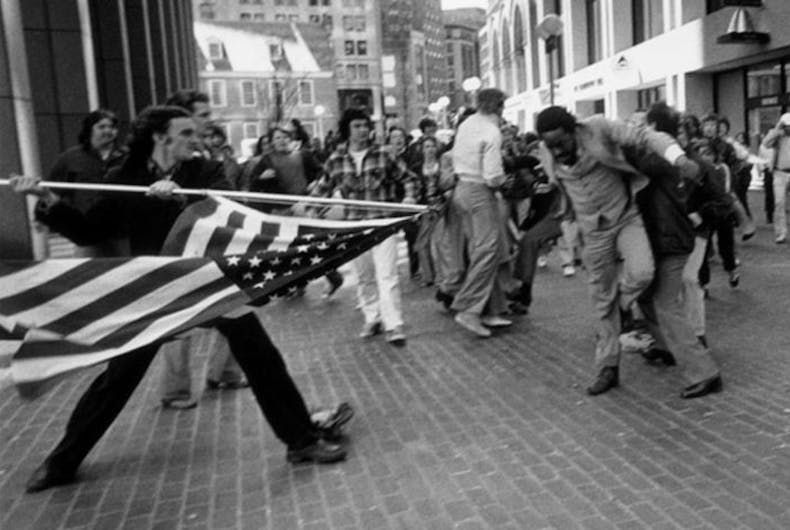 The 50 stars and 13 stripes on our flag of red, white, and blue represent a collective image of the United States of America.

Merriam Webster defines patriotism as “a love for or devotion to one’s country” and nationalism as “loyalty and devotion to a nation; especially: a sense of national consciousness exalting one nation above all others and placing primary emphasis on promotion of its culture and interests as opposed to those of other nations or supranational groups.”

When questioned by reporters, Trump seemed to imply that he may not have understood the meaning of the word. It is commonly known that he rarely reads, and his grounding in history is virtually non-existent.

Related: Trump’s latest response to Charlottesville was as racist & coded as ever

But a president of the United States should have at least a basic grasp of world history. Playing ill-informed never well serves the nation he said he loves and will defend.

In fact, ignorance on the part of the most powerful person on the planet can result in catastrophic consequences.

Trump, however, betrays a very clear comprehension of the historical meanings of the term when he stated, “It sort of became old-fashioned. It’s called a nationalist. And I say, really, we’re not supposed to use that word.”

His close ties to John Bolton and Steve Bannon – two self-described “nationalists” – demonstrates by association his deep familiarity with the term.

Donald Trump based his motto to “Make America Great Again” on his notion of “America First.” Historically, the “America First” movement organized in the late 1930s ending in 1941 as the leading isolationist pressure group for non-intervention in WWII. It advocated for an impregnable defense around the United States to keep the country strong and safe from outsiders, which Trump has mimicked.

German nationalism, for example, which resulted in the Second World War, was constructed by a party and its leader who manipulated a fearful and angry population to scapegoat others – the Jews – for the nation’s severe economic problems.

Donald Trump’s march to the White House centered on promoting a form of extreme nationalism (jingoism, chauvinism) intent on exciting xenophobic and racist fears and ideologies.

His appeals to “nationalism” (with isolationism, building walls, and talk of “shithole countries”) presented in the guise of “popularism,” was intended to feed on people’s fears and prejudices, which has resulted in the segregation of people and nations from one another, and threats and dangers of violence. He attacks and attempts to separate from long-established allies, while having obsessive admiration for tyrannical dictators.

He has either threatened or has actually rolled back many of the rights and protections minoritized peoples have tirelessly fought for over the past decades: reproductive rights, voting rights, citizenship rights, human rights, anti-torture guarantees, immigrant rights, rights of unreasonable search and seizure, rights of assembly, disability rights, freedom of religion, transgender rights, marriage equality and equal protection under the 14th Amendment of the Constitution.

As other nationalist authoritarians, Trump has scapegoated already disenfranchised identity categories as the internal and external enemies of the United States: Muslims and anyone from Muslim-majority countries, Mexicans and all Latinx people, urban “thugs,” the press, Somalis, President Barack Obama, Hillary Clinton, Democrats, the ACLU, immigrants, anyone who disagrees with the President, Robert Mueller and his panel of investigators, and now, a supposed “angry liberal mob.”

He resents and attacks the political, media, and intellectual “elites” to the point of instigating scorn and harassment of the “elite media” covering Trump rallies. And his near obsessive calls for “law and order” involve draconian (and possibly unconstitutional) measures of surveillance, torture, and arrest.

Trump fans the flames of controversy to a white-hot intensity over Colin Kaepernick and the movement he spawned in taking a knee during the National Anthem at NFL games to highlight the deplorable treatment of people of color in our nation, and specifically, the deadly police actions taken against unarmed black and brown men.

As the case with other nationalist leaders, Trump deploys his adult children and son-in-law as close trusted political operatives, who meet with visiting diplomats and travel to foreign capitals to negotiate political and business deals, plus his continuously unresolved conflict-of-interest issues and “emoluments” breeches between his position as President and his worldwide business interests, with so many probes into corruption it has become a common occurrence.

He employed the bait-and-switch tactic throughout his campaign slogans of “America First” and “Make America Great Again,” transforming these in operation into “Me First,” “Make America More Racist, Xenophobic, and Misogynistic Again,” plus “Make Donald Trump Even Richer and More Powerful Again.”

Donald Trump certainly is no patriot, and it is about time he finally admitted to his nationalist ideologies.

A nationalist underpinning, though, has long existed in this country. Immigrants whom the government allows entrance into the United States are pressured to assimilate into a monocultural Anglo-centric culture (thinly disguised as “the melting pot”), and to give up their native cultural identities. Referring to the newcomers at the beginning of the 20th century CE, one New York City teacher remarked:

“[They] must be made to realize that in forsaking the land of their birth, they were also forsaking the customs and traditions of that land….”

President Theodore Roosevelt (1907) was an outspoken proponent of an “Americanist” (assimilationist) mandate:

If the immigrant who comes here in good faith becomes an American and assimilates himself (sic) to us he shall be treated on an exact equality with everyone else….But this [equality] is predicated on the man’s (sic) becoming in very fact an American and nothing but an American….There can be no divided allegiance here. Any man who says he is an American but something else also, isn’t an American at all….We have room for but one language here, and that is the English language, for we want to see that the crucible turns our people out as Americans, of American nationality, and not as dwellers in a polyglot boarding house.

While the United States symbolizes a beautiful nation founded on a noble concept, a vibrant idea, and a vital and enduring vision, as a country, it remains still a work in process progressing toward but not yet attaining and not yet reaching that concept, that idea, and that vision.

A true patriot is a person who, indeed, loves their country (though not necessarily viewing it as “exceptional”), but also one who sees the way things are, and one who attempts to make change for the better. A patriot also views other countries with respect and admiration, as valued members of an interconnected and interdependent world (global) community.

Let us never forget that this nation, this E Pluribus Unum (“from many, one”) came the diversity from the entire world: the traditions, the languages, the cultures, the religions, the belief systems, the totality of the human experience, which must be acknowledged, supported, cherished, valued, and nurtured.

You can still buy an official ‘LGBTQ for Trump’ T-shirt, despite all the attacks