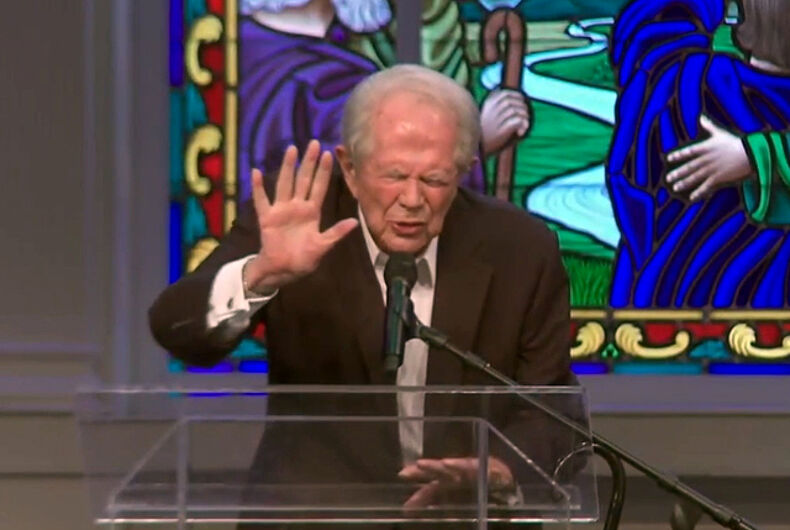 The Christian Broadcasting Network is entering the fray with a 24-hour news network of their own, intending to have a Christian-focused look at the stories of the day.

The CBN News Channel soft launched in 15 U.S. cities, and made it official today.

The founder and chairman of CBN, Pat Robertson, has a long history of anti-LGBTQ statements, including calling transgender people “frauds,” and suggesting in the wake of the Pulse nightclub massacre that, “the best thing to do is to sit on the sidelines and let (Muslims and LGBTQ people) kill themselves.”

Pat Robertson established the Christian Broadcasting Network in Virginia Beach, Virginia in 1960, and has turned it into a Christian media empire. He also used his leverage from the network and his own CBN University to help fuel his 1988 Presidential run.

He has remained an influential Christian broadcaster over the years, and as such has a heightened amount of access with the current White House.

The new networks current linkup includes “Faith Nation,” a program focusing on U.S. politics, and “Jerusalem Dateline,” presenting news and information from Israel. Other programs have focused on people such as Kim Davis, who infamously refused to issue marriage licenses to same sex couples in 2015, eventually being sent to hail.

Much of their current coverage has been centered on Supreme Court nominee Brett Kavanaugh.

Unlike their competitors in 24-hour cable news, CBN is broadcasting in the local market, and intends to be largely financed through donations versus advertisements.