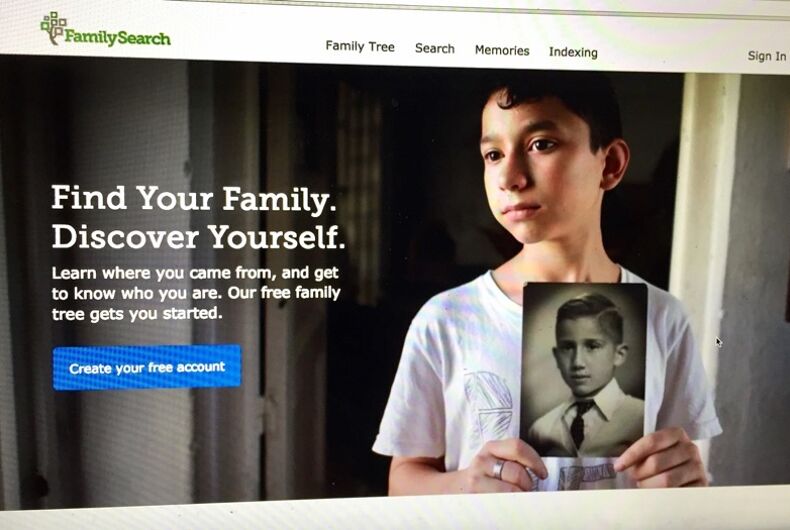 During Pride Month in June, LGBT people interested in family history received interesting news. Beginning next year, the world’s largest genealogy organization, the Church of Jesus Christ of Latter-day Saints, will release a redesigned website that will include same-sex families.

FamilySearch.org, sponsored by the Mormons, first said in 2015 that it would add a feature for same-sex relationships, the Deseret News reported. Now, the major overhaul to the website’s system should be ready by 2019.

There are several other family history sites – Ancestry.com is probably the best known – that already allow same-sex recognition. In addition to Ancestry, other major sites are Israel-based MyHeritage and England-based Findmypast. FamilySearch is the only one that is totally free for all of its databases.

For LGBT genealogists, the FamilySearch news was a pleasant surprise.

“FamilySearch is among the last to the show,” said Victoria Kolakowski, a transgender woman who is president of the board of the Oakland-based California Genealogical Society.

“[It] is a driver in technology development in the genealogy world. It hosts the annual RootsTech conference, the largest genealogy technology convention in the world. Independent software developers want to connect with its databases, and so the way that they implement it could affect the future development of genealogy software.”

Many people do not trust online services to host their family trees, but use them for research. Programs where people keep their trees on their home computers, such as Family Tree Maker, RootsMagic, and Legacy, try to sync to online databases like Ancestry and FamilySearch, Kolakowski explained.

“It’s something that’s important to all genealogists, not just LGBTQ genealogists. It’s consistent with basic genealogical principles that we document history the way people lived it, not the way that some wished that they had,” Kolakowski said.

“And we all know that everyone, LGBTQ and straight, have same-sex couples in their families.

Kolakowski, who’s an Alameda County Superior Court judge, began digging around her family history several years ago. She is not Mormon but has been to Salt Lake City several times to conduct research at the LDS library and attend conferences.

Dr. Stewart Blandón Traiman, a gay man who serves as the recording secretary for the California Genealogical Society, also applauded the FamilySearch news. “It’s huge,” he told the Bay Area Reporter during a recent interview.

But Blandón Traiman also pointed out the long history of homophobia in the Mormon Church.

“The history of the LDS church is extremely homophobic. They excommunicated thousands of members due to sexual orientation and that continues today,” he said.

Blandón Traiman is not Mormon, but he said the church’s decision to acknowledge the existence of LGBTs and same-sex families is significant. “They’re trying to compete with these other sites,” he said.

And, while he said it’s “definitely nice” to have the new policy for FamilySearch.org, it won’t help him because he doesn’t have a tree on the site. “Not in the least,” he added.

Change has come quickly to family history sites in recent years. For example, Ancestry.com used to assume that the spouse of a man was a woman and vice versa. It no longer does that, Kolakowski said.

“Undoubtedly, FamilySearch is a leader in the genealogy community. It employs many professional genealogists, and its website is used by many Mormon families around the world, in addition to the genealogical community.” Kolakowski said.

“Family history is very important to the Mormon faith,” she added.

In a statement, FamilySearch.org said that significant work must be done to the site’s infrastructure to incorporate same-sex families.

“Several systems that surround Family Tree [FamilySearch’s program], such as tree and record searching, must be significantly redesigned to support same-sex relationships before Family Tree can release this capability,” the company said.

Blandón Traiman, who’s an internal medicine physician working in health information technology, recently launched his Six Generations website to provide guidance and consultation services to others looking to do family research. He said that his approach to genealogy is to take it in six-generation segments. He also gives presentations focused on LGBT history and genealogy.

“Here’s the thing that’s important about this to non-genealogists,” Kolakowski said.

“Young Mormons, when they’re looking into their family history, are going to see that they can document same-sex relationships. That was exactly the reason that some people resisted making this change – concerns that it would be seen as validating our relationships.

“I’m not sure that it does, because it’s taking a neutral stance. But a neutral stance is a lot better than a negative one, one that denies the reality of modern society.”

Cynthia Laird, who is married to Victoria Kolakowski, is the news editor of the Bay Area Reporter. This article is published as part of the LGBT History Project.

Stormy Daniels on sex with Trump: ‘I laid there and prayed for death’