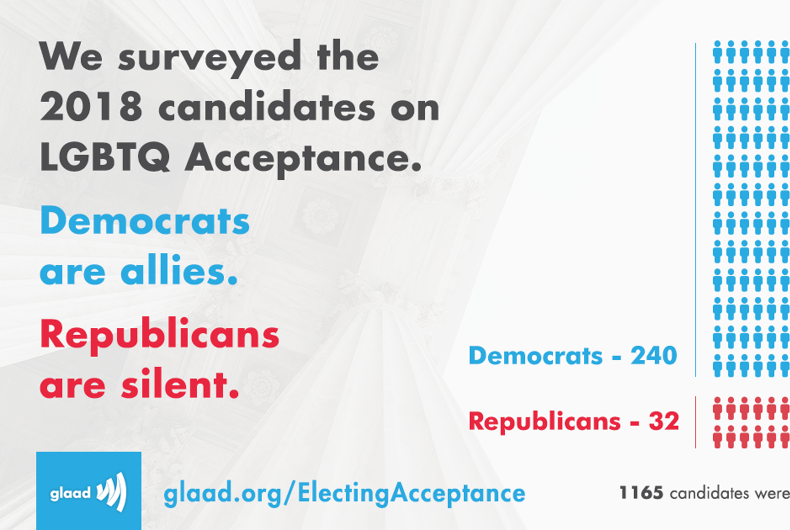 Republicans were much less likely to respond to the survey than Democrats.Photo: GLAAD

A survey of Democratic and Republican candidates on LGBTQ acceptance showed a stark difference between the two parties.

The poll, conducted by GLAAD, was sent to 1165 candidates for the Senate, the House, Governor, and Lt. Governor this past July.

The candidates were asked if they were comfortable with LGBTQ people in various situations, like “Learning that a member of your family is LGBTQ” or “Seeing a same-sex couple holding hands.” These questions are similar to Harris Poll’s “Accelerating Acceptance Report.”

Respondents are then labeled “allies,” “detached supporters,” or “resistors,” based on how many situations they are uncomfortable with.

Related: Less than half of Americans now accept LGBT people in a dangerous reversal of progress

Only 32 of the Republicans who received the questionnaire even responded. Of those who responded, only about half were categorized as “allies.”

240 Democrats responded to the survey, and 99% of those who responded could be classified as “allies.”

Because of the voluntary nature of the poll, the samples are self-selecting. Presumably, the more LGBTQ-accepting candidates in each party were the ones who responded.

“Acceptance should never be a partisan issue, but the paltry response from Republican candidates is unfortunate and the latest sign that creating an America where LGBTQ Americans are accepted is not a priority for their party,” said GLAAD President Sarah Kate Ellis.

“These results, coupled with the Department of Health and Human Services’ planned attack on transgender Americans, is a wake up call for LGBTQ people allies to get out and vote on November 6.”