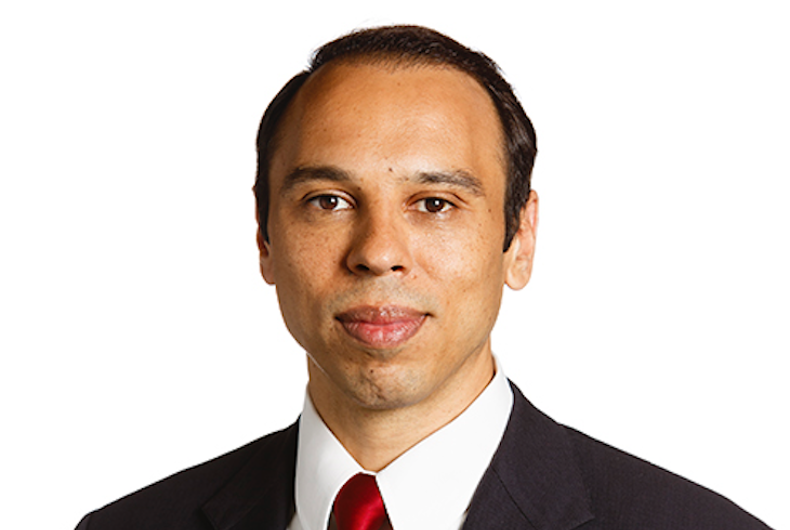 The awful anti-trans policy that the Trump administration is proposing has a face: Roger Severino.

Severino is director of the Office of Human Rights at Health and Human Services and clearly a critical force behind the administration’s effort to define trasngender individuals out of existence. The proposed policy is in keeping with Severino’s long history of bias against LGBTQ individuals. In fact, his opposition to LGBTQ rights has been the defining characteristic of his career.

Severino has been on a tear about removing protections for LGBTQ people, especially transgender people, for years. Before joining the Trump administration in March 2017, he served as the director of the DeVos Center for Religion and Civil Society for the Heritage Foundation, the right-wing group. (The DeVos Center is named after Education Secretary Betsy DeVos’s parents, who donated the money to start it.) Prior to Heritage, Severino worked at the Becket Fund, a religious liberty legal group.

Severino has focused on two main issues: marriage equality and transgender rights. At the Becket Fund and subsequently at Heritage, he was a fierce opponent of marriage equality. A decade before religious liberty came before the Supreme Court, Severino foreshadowed the argument by claiming marriage equality placed an undue burden on Christians who opposed it.

“Legalizing same-sex marriage will seriously undermine the religious freedom citizens have enjoyed since the founding,” Severino wrote in 2008, conjuring up images of churches losing their tax exempt status and “the ability to solemnize civil marriages,” neither of which was ever at stake.

Severino then took that same argument and applied it to Obamacare. He especially objected to a portion of the Affordable Care Act that prohibited discrimination based on race, color, national origin, age, disability, and sex in federally-funded health programs.

But it was transgender rights that really inflamed Severino. When the Office of Civil Rights under Obama tried to extended protections to transgender people, Severino went ballistic, labeling it an “abuse of power” that requires people to pledge “allegiance to a radical new gender ideology,” and gives transgender people “special privileges” that disadvantage people of faith.

Such opposition to transgender rights made him a natural for the Trump administration. At the time of his appointment to HHS, activists warned of the damage Severino would inflict.

“I could not think of a more dangerous person to head up the Office of Civil Rights at HHS,” said JoDee Winterhof, senior vice president of policy and political affairs at the Human Rights Campaign. “Mr. Severino takes pride in being a stark opponent of the LGBTQ community and has made it clear that his number one priority is to vilify and degrade us.”

Indeed, Severino has been attacking LGBTQ rights for months. He just hasn’t attracted the same attention. Earlier this year, he said that doctors could cite religious grounds as a reason to refuse to treat LGBTQ patients

His latest move is noteworthy for how sweeping it is. Instead of trying to peel away protections, he simply decided to eliminate the category of people being protected.

What Severino may be doing is proposing an outrageous change that he knows won’t fly. But then he can come back with less severe but equally disgusting policy changes that he can palm off as a compromise.

More broadly, Severino is proof that President Trump’s antics are often just a sideshow. The real damage being done is by bureaucrats like Severino who know how to pull the levers of power that they control. Trump’s ignorance and laziness prevent him from doing nearly as much damage as he might. Unfortunately for us, there are plenty of people like Severino in is government who are happy to correct that oversight.

Frances Kellor: The lesbian behind the multiculturalism