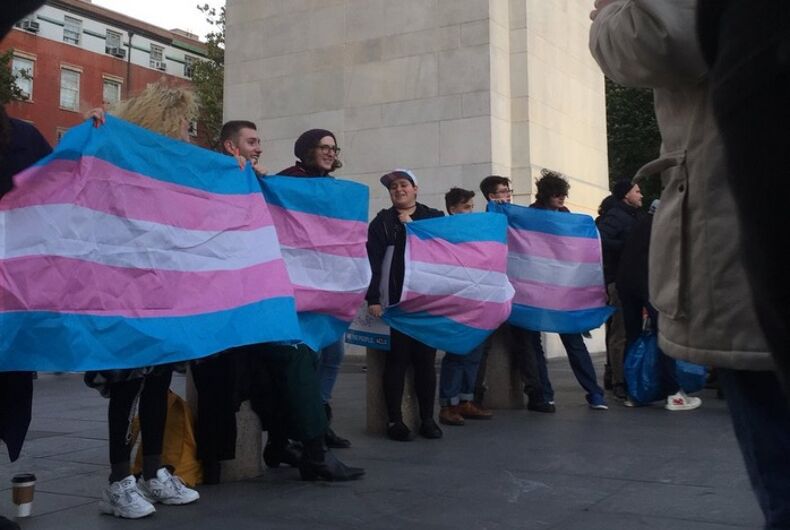 Transgender activists rallied in New York City last night after it was revealed that the Trump Administration is trying to redefine “gender.”

A New York Times article on Saturday described a leaked Department of Health and Human Services memo that described an effort to redefine sex in federal law as “a person’s status as male or female based on immutable biological traits identifiable by or before birth.”

Sex would be defined by a person’s birth certificate, with any disputes settled with DNA testing.

The purpose of the redefinition is to deny transgender people protection under federal civil rights law that prohibits discrimination on the basis of sex.

Activists were quick to organize a rally in Washington Square Park, co-sponsored by a dozen transgender and LGBTQ organizations.

GLAAD’s Ross Murray captured some video and photos of the protest.

Favorite moment from the trans protection rally in NYC. If trans people weren't important they wouldn't be treated as a threat. You have power, and I'm proud to support you. pic.twitter.com/dFzsCpEgSg

Other images from the trans protection rally in NYC. pic.twitter.com/PA6HsX0x1r

📢 Rally against the Trump administration's latest attack on trans people.

DC: Tomorrow at the White House with @TransEquality: https://t.co/Mr0PYU5RyI#WontBeErased pic.twitter.com/70dUBfA6nX

The protestors had awesome signs.

More rallies are planned for later today, including one organized by the National Center for Transgender Equality in Washington, D.C.

Others have taken the article as a rally cry to vote for Democrats in the upcoming midterm elections.

The best way to show we #WontBeErased is to make our votes count. If 10 million LGBTQ voters and millions of allies #TurnOUT over the next 15 days, we can turn the tables. Check your registration status today: https://t.co/Xs3ekRUJCp

The Trump administration is trying to make Trans people disappear by defining gender as only male and female, determined by genitalia at birth. This is an egregious, callous attack on the LGBT community. Send a clear message on Nov 6th that there is no place for hate in America.

The National Center for Lesbian Rights said that the fight will continue in the courts, which have the last say in defining sex discrimination.

“The federal courts have interpreted sex discrimination laws broadly for decades in order to ensure that all forms of sex-based discrimination are prohibited, including discrimination against transgender people,” said NCLR’s Shannon Minter.

“This proposal is out of step with longstanding legal precedent and would create havoc in federal agencies, which are charged with enforcing the law and cannot simply disregard binding legal decisions. And no matter what this administration orders federal agencies to do, the courts still have the authority to interpret these laws and will continue to protect transgender people.”

And the Trevor Project, which works to prevent LGBTQ youth suicide, said that the Trump Administration’s attempt to erase transgender identity could be harmful to trans youth.

“When a young person hears that their existence and gender identity will not be recognized by their government, they hear that they are not worthy to be a part of that nation,” said Amit Paley of The Trevor Project. “Transgender youth seeing this report should know that they are not alone and that their identity is valid – nothing the government does can change that.”

30 years ago, they stormed the FDA & seized control. So where are they now?

RuPaul & Raja will appear on ‘The Simpsons.’ Check out their characters.