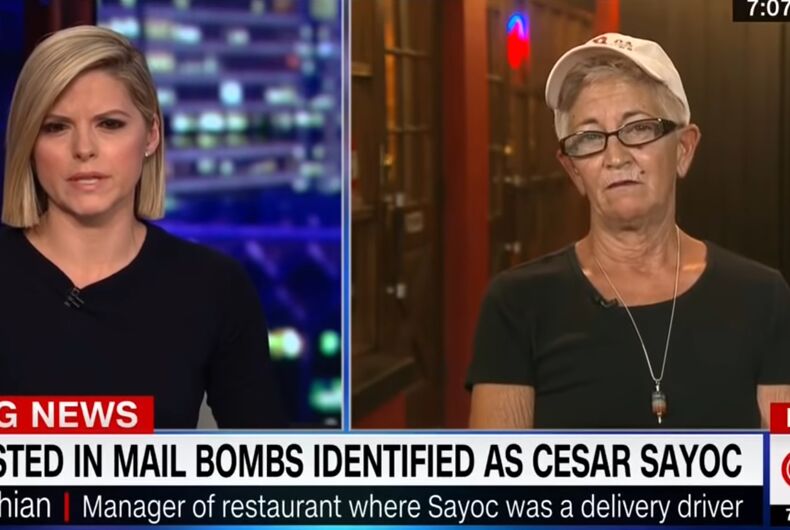 Debra Gureghian said that the #MAGABomber was a model employee, but his "political views" were extreme. Photo: Screenshot/YouTube

Debra Gureghian, the manager of the Florida restaurant where alleged #MAGABomber Cesar Sayoc was a driver, told CNN that she was scared by his political views.

Gureghian, who is a lesbian, said that Sayoc was a model employee: he was punctual and polite.

She said that his “political views” that were troublesome.

“He had issues,” Gureghian said. “He was anti-gay, anti-black, anti-Jewish, you name it. Everybody that really wasn’t white and wasn’t a white supremacist didn’t belong in the world. That’s what he used to say to me all the time.”

Related: The #MAGABomber has a history of making weirdly racist LGBTQ tweets

She said that he told her that she would “burn” because she’s a lesbian.

“He knew I was a lesbian and a very proud lesbian,” she said. “He made it a point to tell me that God had made a mistake with me and that I should burn in hell along with my black friends.”

She said he insulted her to her face because she is a lesbian, but she referred to those statements as his “political views.”

“But more than once he told me that if he had complete autonomy, I would burn in hell with all the blacks and Jews and Hispanics and everybody else. It was just the white supremacists that were gonna rule the world. And he told me, ‘As much as I like you Debra, you’re gonna be the first one I burn.’”

She said that he also talked about an island that he wanted to put various people on – Barack Obama, Hillary Clinton, Rachel Maddow, CNN, and her – and blow up.

She also said that she got rides from him in his famous van that was covered with white supremacist stickers and signs. She said that it was filthy and there were mannequins without heads inside.

She said that every time she was in the van she made sure she had a way out because she knew he hated lesbians and she was worried that he would turn violent.

Several times in the interview, Gureghian said that she couldn’t fire him because of his political views. She even got frustrated and said that it’s what “people seem not to understand.”

Thousands march in Taiwan’s pride ahead of marriage equality referendum