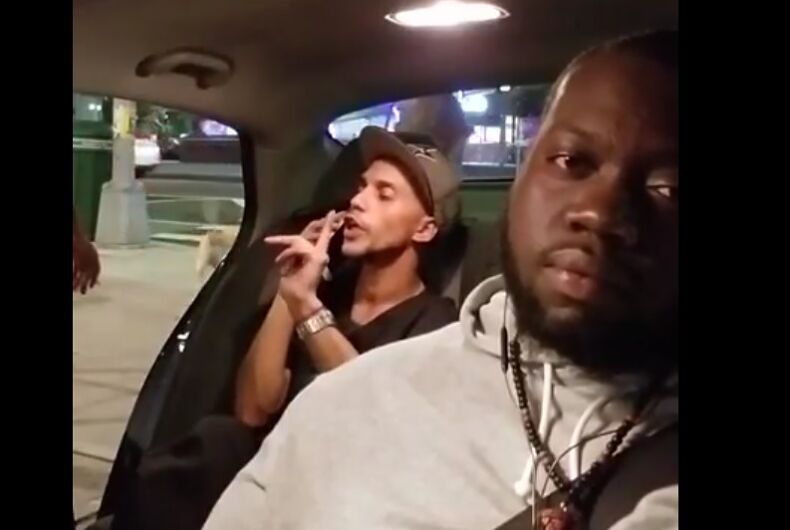 Video of a gay Trump supporter calling the police on a black Lyft driver has gone viral.

Robert Ortiz and two friends got into a Lyft in New York City. Ortiz and his friends asked the driver, Shawn Pepas Lettman, to play their music, and he said no. They got into an argument and the driver pulled over.

Ortiz called the police while they were pulled over and Lettman started recording.

The 16-minute video shows Ortiz talking with the police and saying that he’s not leaving until they show up.

Ortiz tells the police that he’s calling because he was “racially profiled because I’m not black.” His complaint to the police is about the music, although he does insinuate that he’s worried that the African American driver might do something that “threatens my life.”

After he gets off the phone with the police, he calls the driver a “piece of shit” and then talks with Lyft’s customer service to accuse Lettman of being racist against non-black people and to ask to be reimbursed for $8.01.

The conversation with customer service got heated, and Ortiz said that the driver was “racist against gay people” and said he would sue Lyft. He said that he was an “American citizen that voted for Trump.”

Ortiz said Black Lives Matter “is bullshit” and then called the police again.

Related: There is now a Trump supporter dating site. It bans gays & bisexuals.

The driver’s account was suspended by Lyft so that they could investigate the situation, so the dad of two lost wages. He started a GoFundMe to help him recuperate some of that money and has received almost $21,000 as of publication.

“I know America is better than this and despite the hate we have to deal with from a few, my heart tells me, the world is mostly good,” Lettman wrote.

Instinct reports that Ortiz has lost his job since the video went viral, and Lettman has been reinstated.