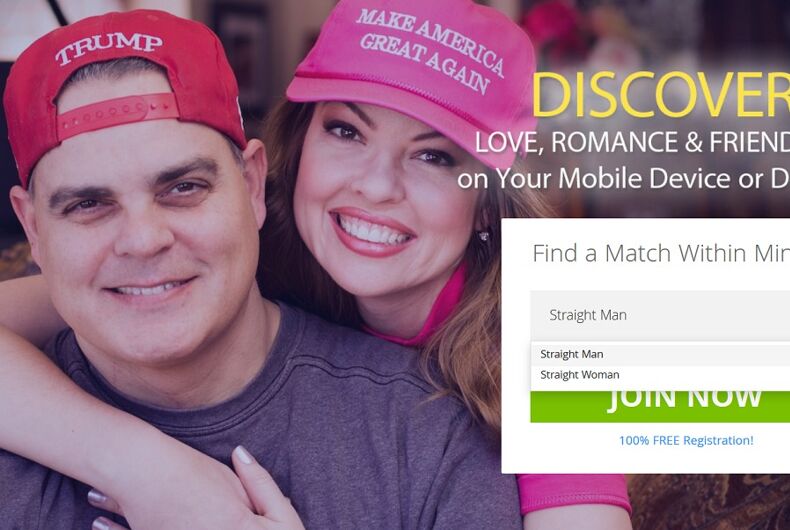 There is now a dating site just for Trump supporters.

Trump.Dating founder Sean McGrossier said in a press release that rightwingers need a safe space: “Every Trump supporter in America right now knows how hostile the political climate is, forced to hide our loud-and-proud support for the president in colleges, restaurants, chatrooms, and more.”

So I went to check it out. The site, right on the home page, makes it clear that LGBTQ people aren’t welcome.

Users have to choose whether they’re a “straight man” or a “straight woman” before even seeing the rest of the account creation process.

While the site could have just said that it focuses on heterosexual relationships, setting up the question this way lets bi and trans people (who may well be men seeking women and women seeking men) that they aren’t welcome.

But Trump.Dating welcomes people who are cheating on their spouses.

The drop menu for relationship status has several options for people who are in relationships, including both “happy” and “unhappy” marriages. It makes sense that a site set up for people who like Donald Trump would be cool about extramarital affairs.

Not that I care about their private lives. I would just rather they not use the Bible to bash LGBTQ people while they’re having all the fun they want.

Once on the site, I looked at a few profiles. The search function is basic and cumbersome, and it doesn’t tell you how many profiles matched what you were looking for. I searched for people from Indiana and got quite a few screens (15 profiles per screen) of results.

Some of them look like spam bots, but most appeared legitimate. The results I got were mostly of white people, although there were a couple African Americans.

I didn’t see a woman’s profile that mentioned politics. About half of the men’s profiles I looked at did.

User names often doubled as political messages: “FreeCitizen,” “LegalImmigrant,” “MAGAchick.” All of those user names had numbers after them, suggesting that the plain versions were already taken.

Creating a profile is free. The site is monetized with a “premium” membership that has a number of features, including a better search function.

It looks like an actual dating site with a real business plan.

I just don’t see the point. Mainstream dating sites ask you about your political beliefs, and users can always mention that they love Trump in their profiles if that’s really important to them.

And mainstream dating sites are designed better and have more users.

Trump.Dating’s advantage, according to McGrossier, is the safe space aspect. “With Trump.Dating, users don’t have to skirt around the awkward Trump question,” he said.

But Trump supporters are not an oppressed minority, and there are so many of them that it’s not hard for them to find each other on OKCupid.

I don’t expect it to be around for long.

In historic first, Gus Kenworthy kisses his boyfriend at the Olympics on TV