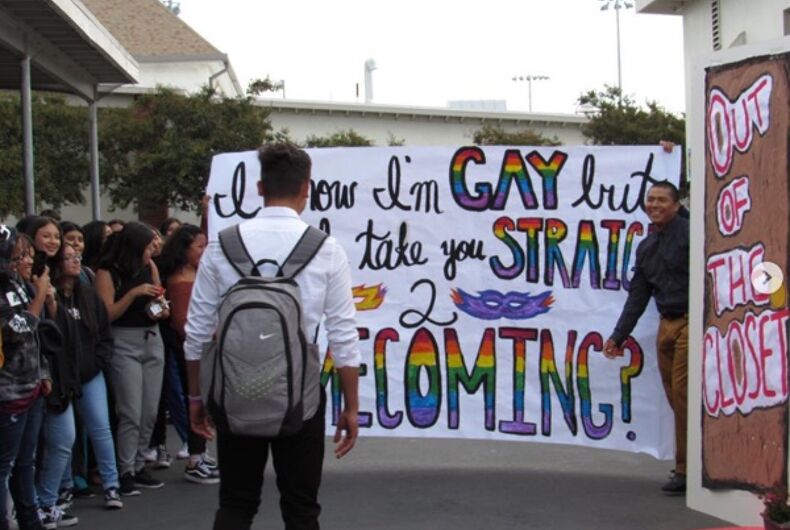 Alexander Duarte has never gone to a school dance with a date. But after the gay teen asked his friend, football captain Erick Pineda, to homecoming on National Coming Out Day, that’s about to change.

Both teens go Valley High School in Santa Ana, California and several students and teachers helped Duarte spring the big surprise on Pineda as we walked to lunch on campus. They lined a route directly to a makeshift closet and a huge sign reading “I know I’m GAY, but can I take you STRAIGHT 2 HOMECOMING?”

With Christina Perri’s “A Thousand Years” playing, Duarte burst out of the closet to ask the big question.

“It’s very important for me to be going to Homecoming with Alexander because I’m setting an example for not only my school, but also my community,” Pineda told Instinct magazine. “I was definitely excited to be asked to homecoming because I knew how important this was for my friend and seeing the support from the staff and students was amazing.”

“It all started as a joke. One day he said to me, Yo, take me to homecoming!’ so I knew that if I did it I would have to set the bar and be extra,” Duarte told the magazine.

“It was really important because I have never had a date to a dance and this is my senior year so something clicked inside and inspired me to actually ‘ask Erick’. For me it was also about setting an example for others on how to go all out on their proposals and, more importantly, that it is ok for a brown boy to ask another dude.”

Duarte says that he and friends worked on the proposal for three weeks to prepare and spent 20 minutes just setting up the big event that day. Watch it below and try not to smile from ear to ear.

Just you know coming out of the closet.

When it comes to Republicans, there is no justice. There can be no peace.