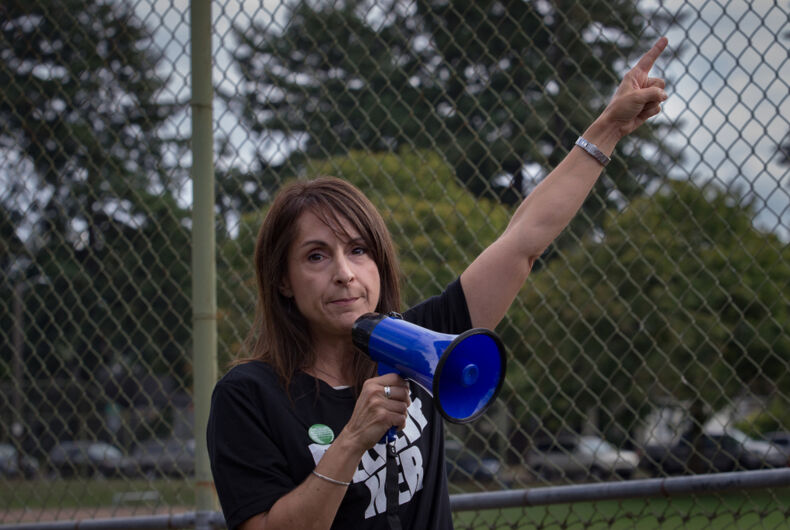 Portland, OR – September 30, 2018: Hundreds gathered at Rose City Park in protest against the nomination of Brett Kavanaugh for the U.S. Supreme Court, and in support of Dr. Christine Blasey Ford.Photo: Joseph Frazier / Shutterstock

Dr. Martin Luther King Jr. chanted “There can be no justice without peace and there can be no peace without justice” outside a California prison holding Vietnam War protesters. In his commitment and passion for justice, he understood several connecting strands.

“I see these two struggles as one struggle,” he said.

By fighting a war “against the self-determination of the Vietnamese people,” he realized that his country had been proliferating injustice. Fighting for the civil and human rights of people in his home nation without opposing what King believed to be the clear exploitation of the Vietnamese people would have contradicted his declaration that “injustice anywhere is a threat to justice everywhere.”

Social justice activists have placed their lives on the line to ensure a better, more peaceful world with a more level playing field between people, where a safety net catches people who have hit tough times, and people with limited abilities are able to meet their needs.

Because of their dedication to the concepts of fairness and justice and devotion to working for equality of opportunity and economic justice, they have given us so much. But as we know, the struggle for social justice is ongoing, and the journey must continue before we collectively reach our ultimate destination.

Throughout the Brett Kavanaugh hearings, Dr. King’s prophetic truth again surfaced. In the toxic environment in which the President of the United States and leaders on the Republican side of the aisle blocked a comprehensive FBI investigation into Dr. Christine Blasey Ford’s allegations of sexual abuse against Kavanaugh, peace could not prevail. Justice was denied.

Protestors demonstrated their outrage and disgust at a process in which the majority of Senators failed to believe a woman who took great risks to her personal and professional life to come forward and tell her truth.

It was a process that protected a man who quite obviously committed perjury under oath, who politicized the hearings with claims of vast left-wing conspiracy theories, and who clearly demonstrated a lack of character and temperament to sit on the most powerful and prestigious judicial body in the land.

Right wing politicians, pundits, and Fox News entertainers now march to the beat of identical midterm election talking points. They painted protesters as a well-funded extremist, angry, and violent mob attempting to topple the foundational pillars of our government.

They stoked fear and resentment against anyone who spoke up and resisted the seating of Kavanaugh on the Supreme Court.

On Twitter, Fox News contributor Todd Starnes called protesters “animals” who shouted in the Senate gallery during the vote to confirm Kavanaugh, and called for them to be forcibly ejected.

Those screaming animals in the Senate gallery should be tasered, handcuffed and dragged out of the building. #Kavanaugh

Donald Trump referred to the protestors as “evil” and as “an angry left wing mob.” On the other hand, when Trump referred to torch-bearing neo-Nazis and white supremacists marching through the streets of Charlottesville, Virginia he said some of them “were good people.”

If you want to see an actual mob, simply attend a Trump political rally where the Bully-In-Chief revs his crowds into heated frenzy by demanding to “lock her up.”

So yes, Donald, and Mitch, and Lindsey, and Chuck, and Paul, and Laura, and Jeanine, and Tucker, and Sean, and Steve, and Ainsley, and Brian, and to the rest, you cannot expect peace without justice.