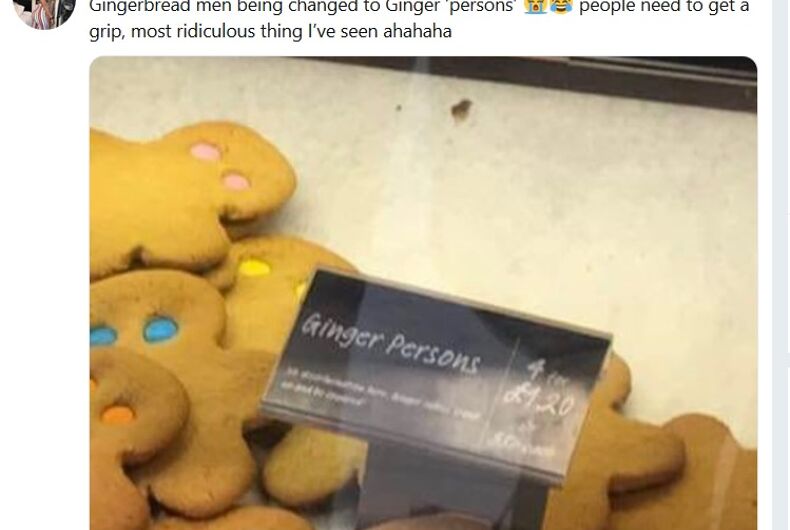 Earlier this month, in a since-deleted tweet, Demii-Leigh Heffron tweeted an image of cookies called “ginger persons” instead of “gingerbread men.” They were being sold at Thomas the Baker in England.

Now, most people would probably not even notice the name, but fragile conservatives are easily triggered. She took a picture and tweeted it with “It’s happening. Stop the earth I want to get off.”

In other words, Thomas the Baker violated rightwing political correctness by calling the cookies “ginger persons.”

Here are just a few of the tweets complaining about the cookies’ name.

Gingerbread men being changed to Ginger ‘persons’ 😭😂 people need to get a grip, most ridiculous thing I’ve seen ahahaha pic.twitter.com/PWEbNPKGdU

A bakery in the UK has renamed 'Gingerbread Men' to 'Gingerbread Persons' 🙄😑@MuireannO_C thinks this "degenderfication" has gone too far#MuireannInAction pic.twitter.com/joVcONlK0G

It's 2018, so of course #Halloween gingerbread men are now "ginger persons" 😩😩 #ThisTakesTheBiscuit pic.twitter.com/JxJumMEI6w

Can't see me buying 'ginger bread PC persons' some how! Infact, in true hysterical, PC, leftwing, zealous fashion I reckon we should boycott any shop not selling #gingerbreadmen. #savegingerbreadmenfromemasculation

The only problem with their theory? The cookies got their name in 1983, according to Thomas the Baker, who didn’t seem to even know why they were called that.

Sorry to disappoint you all – they have been Ginger Persons since 1983! It was chosen by one of our Managers in York and the name stuck. We did get a complaint from trading standards in the 80's that we were discriminating against ginger haired people – seriously!! https://t.co/bteVKsBaoo

Conservatives accuse the left of viewing the world through a hyper-politicized lens, assuming that everyone has bad intentions, and getting bent out of shape over trivial slights.

But with the right, it’s always projection.

Anti-LGBTQ graffiti was found on a Holocaust memorial