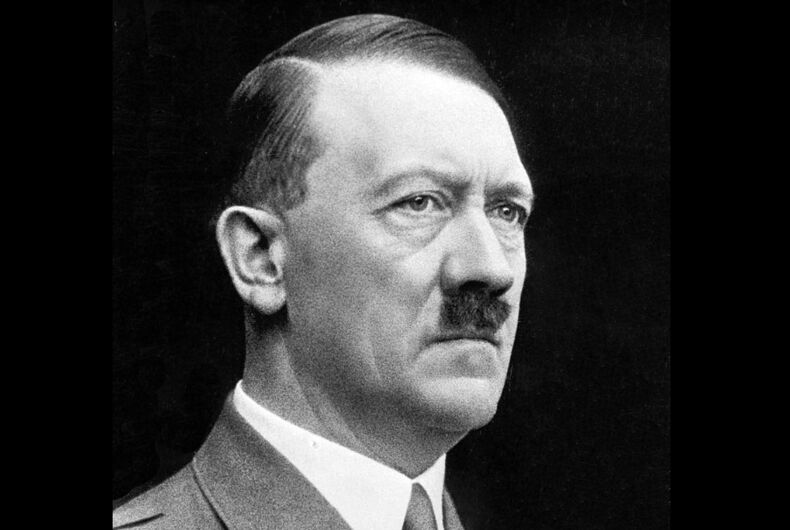 Fundamentalist Christians Scott Lively (also a perennial candidate for Massachusetts governor) and Karen Abrams’ book, The Pink Swastika: Homosexuality in the Nazi Party, serves to articulate and perpetuate the revisionist argument that most of the top leadership in the German Nazi regime were homosexuals and other types of “sexual deviants,” including but not limited to Hitler himself and his “inner circle”: Goebbels, Roehm, Goering, Rosenberg, Himmler, and Hoess.

They go further by arguing the that eight of the top ten serial killers in the US were likewise homosexual.

Throughout the book, Lively and Abrams make clearly conflicting assertions and claims.

They quoted Robert Waite: “There is insufficient evidence to warrant the conclusion that Hitler was an overt homosexual. But it seems clear that he had latent homosexual tendencies, and it is certain that he worried a great deal about them.”

Related: Adolf Hitler was bisexual, according to a declassified 1942 intelligence profile

Lively and Abrams, however, conclude, while presenting no verifiable documentation, but only circumstantiallly: “The weight of evidence indicates that Hitler was deeply involved in a series of short and long-term homosexual relationships. Even more certain is that he knowingly and deliberately surrounded himself with practicing homosexuals from the time he was a teenager.”

A 70-page document that has recently come to light adds to the speculation and confusion around Hitler’s sexuality. The document, declassified in 2000 and recently reported widely, is dated December 3, 1943, by the Office of Strategic Services and entitled “Biographical Sketches of Hitler and Himmler.” It includes a sexual profile of the Nazi dictator.

Much of the information, however, was obtained from second- and third-hand sources, of which very few were cited. A “Dr. Sedgwick” is quoted several times (possibly Ernst Franz Sedgwick Hanfstaengl, who was once a friend of Hitler before they had a falling out in the mid-1930s. Hanfstaengl emigrated then to the U.S.).

Dr. Sedgwick asserted that a young Hitler stayed at a men’s hostel, “Maennerheim Brigittenau,” a place, according to Sedgwick, that was a known hangout where older men went to cruise young men. The document asserts that Sedgwick had no personal knowledge of the hostel, and that he heard about it from other sources.

Sedgwick concluded that Hitler most likely did not engage in same-sex sexuality or in an intimate relationship with another man during his youth. Though the report concludes that Hitler expressed both “heterosexuality” and “homosexuality,” or that he may have been “bisexual,” it offers no conclusive evidence for any of its claims.

But who really cares about Hitler’s, or any of the Nazi leaderships’, sexual tastes and behaviors? The Nazis – and each person of all nations and political viewpoints – must be judged on their statements, actions, and behaviors.

The sexual behavior of an individual or a group of people does not and cannot represent the behaviors, views, politics, morality, or any other human characteristic of an entire community. Two people who may be sexually attracted to a third person of their own sex most likely may have nothing else in common with one another aside from that simultaneous attraction.

The Nazis acted on and eventually extended Paragraph 175, the section of the German Penal Code dating back to 1871 with the unification of Germany:

“Unnatural vice committed by two persons of the male sex or by people with animals is to be punished by imprisonment; the verdict may also include the loss of civil rights.”

Nazi ideology rested on the assessment that homosexual (males) lowered the German birth rate; they endangered, recruited, enticed, and corrupted youth; that a possible homosexual epidemic could spread; that homosexuals are “potential oppositionists” and enemies of respectable society; and that sexual relations between people of the same sex impairs their “sense of shame” and undermines morality, which inevitably will bring about the “decline of social community.”

Even before taking power, appearing in their daily newspaper, Völkischer Beobachter 14 May 1928, Heinrich Himmler for the Nazi party argued:

“Anyone who thinks of homosexual love is our enemy. We reject anything which emasculates our people and makes it a plaything for our enemies, for we know that life is a fight, and it is madness to think that men will ever embrace fraternally. Natural history teaches us the opposite. Might makes right. The strong will always win over the weak. Let us see to it that we once again become the strong. But this we can achieve only in one way — the German people must once again learn how to exercise discipline. We, therefore, reject any sexual deviation, particularly between man and man, because it robs us of the last possibility of freeing our people from the slave-chains in which it is now forced to toil.”

Lively and Abrams attempt in their Pink Swastika to explain Hitler’s later statements against homosexuals as an effort to escape public scrutiny regarding his sexuality: “His later public pronouncements against homosexuality were designed to hide the life-long intimacy — sexual and/or homoerotic — which he maintained with the various men he knew and accepted as homosexuals.”

While Nazi ideology and practice rejected lesbianism as well, they did not criminalize same-sex sexuality between women, as they had in Germany’s Paragraph 175 of the Penal Code, because they believed that so-called “Aryan” lesbians could produce children for the “New Germany.”

On the other hand, Heinrich Himmler, Gestapo head and chief architect of the Reich’s anti-homosexual campaign, justified his actions by arguing that male homosexuals were “like women” and therefore, could not fight in any German war effort.

Subsequently, he conducted surveillance operations on an estimated 90,000-100,000 suspected homosexuals, arrested approximately 50,000, and transported somewhere between 10,000 and 15,000 to several concentration camps throughout the Nazi dominion.

Some prisoners were offered release if they agreed to undergo “medical experiments” including either castration or allowing the surgical insertion of an apparatus in the shape of a charcoal briquette into the groin to “cure” the victims’ homosexuality. Nearly all died as did most other homosexual camp prisoners.

Upon coming to power in 1933, under Youth Leader, Baldur von Shirach, the Nazis took over all youth groups and convert them into Hitler Youth groups. One action taken following consolidation was to eliminate all signs of “homosexual corrosion,” because it allegedly posed a threat to state control by “fostering political conspiracies.”

Nazi leaders purged all boys suspected of “homosexual tendencies.” They tried and convicted an estimated 6,000 youth under Paragraph 175 between 1933 and 1943.

While the Catholic Church then and today publicly rejected same-sex sexuality, their own policies boomeranged and hit them in their own faces. Used primarily to silence any potential resistance from the Church, the Nazis conducted their so-called “Cloister Trials” in which they dissolved Catholic youth fraternities, arrested and incarcerated a large number of priests, religious brothers, and Catholic laity in prisons and concentration camps accusing them of being “threats to the state” on fabricated charges of homosexuality.

The Nazi regime connected multiple forms of oppression when Heinrich Himmler reorganized the Reich Criminal Police Bureau to centralize operations by creating a national file on male homosexuals, transgender people, what they referred to as “wage abortionists” (women and their doctors), and to monitor the production and ban the use of contraceptives to “Aryan” women.

Within this Bureau, they established The Reich Office for Combating Homosexuality and Abortion, which in the single year of 1938 alone conducted 28,366 arrests for abortion and 28,882 arrests of male homosexuals.

The common thread running through Nazi ideology regarding gender, gender expression, and sexuality was their intense campaign to control individuals’ bodies and the bodies of members of entire communities in the attempt to control their minds.

Claims that homosexuals are responsible for Nazism and by extension the deaths of 50+ million people as the result of WWII is contemptable and slanderous against LGBTQ people now and from the past.

Regarding Likely and Abrams’ book, the Southern Poverty Law Center states that it is disseminated by anti-LGBTQ groups and organizations, and that reputable historians concur that its premise is “utterly false.”

Pat Robertson once warned viewers of his 700 Club. “Many of those people involved with Adolf Hitler were satanists. Many of them were homosexuals. The two seem to go together.”

The Pink Swastika, Robertson’s, and others’ claims are nothing more than “Holocaust revisionism” of the worst sort.

Women and LGBTQ people have been constructed as second-class and even third-class citizens not merely in Nazi Germany, but today as the current political discourse indicates. But women and LGBTQ are certainly not victims because through it all, women and LGBTQ people as individuals and as groups have resisted and challenged the inequities and have pushed back against patriarchal constraints.

We must learn from the tyranny of the past.