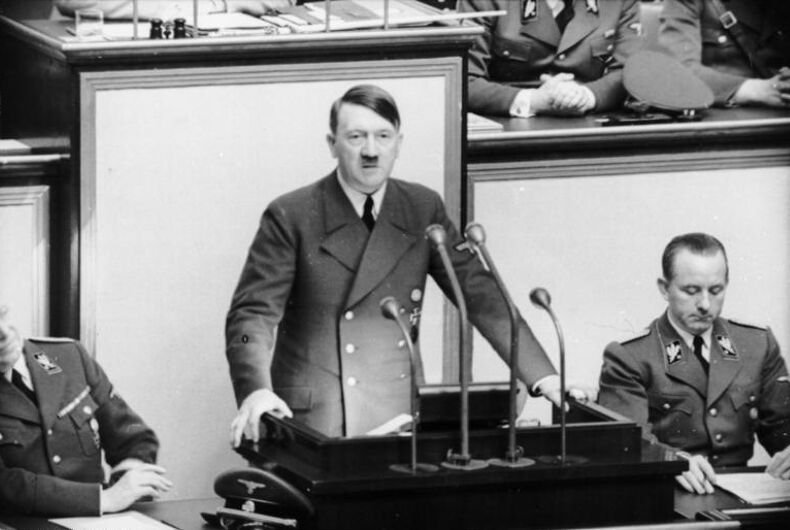 A declassified profile of Adolf Hitler said that he was “both homosexual and hetero-sexual.”

The document, compiled by the Office of Strategic Services in 1942, is a long profile of the personal life of the Nazi dictator. The 70-page document was declassified in 2000, but the British tabloid Daily Star just reported on the references to Hitler’s sexuality in it.

The profile contains extensive information about Hitler, including sleep habits, how he never carried a pencil, and his love of the circus.

Much of the information in the profile was obtained second- and third-hand, and few sources are cited. One name that is brought up several times is “Dr. Sedgwick,” which may refer to Ernst Franz Sedgwick Hanfstaengl, a personal friend of Hitler who fell out with him in the mid-1930’s and defected to the U.S.

In the section on Hitler’s early sexual life in Vienna, the document says that the men’s hostel he stayed in was a known cruising area for gay men.

The Men’s Hostel called “Maennerheim Brigittenau” in Vienna had, Dr. Sedgwick believes, the reputation of being a place where elderly men went in search of young men for homosexual pleasures.

It is probable that these types of old roues and young gigolos became familiar to the young Adolf at this time which would account for his relative lack of genuine disgust with them up to the present time.

A footnote explains that Sedgwick actually didn’t have any personal knowledge about the men’s hostel, but that he heard from someone else that it was a gay cruising spot.

The profile goes on to say that Hitler probably didn’t have sex with another man in this period, but that it shows that he was “egocentric” and couldn’t find the right woman:

In Dr. Sedgwick’s opinion it is unlikely that Hitler indulged in any homosexual relationship at this time but rather represented, as he does today, the type of egocentric and masturbic Narcissus with the craving for the unfindable woman and occasional hysterical outbursts of a sado-masochistic nature.

This account is followed by an “analysis” that called Hitler bisexual. The report doesn’t provide any evidence that Hitler had a same-sex relationship.

His sex life is dual as is his political outlook. He is both homosexual and hetero-sexual; both Socialist and fervent Nationalist; both man and woman. While the true Adolf Hitler is elusive to the diagnostician, there are certain facts which prove that his sexual situation is untenable and even desperate. There seem to be psychic if not also physical obstacles which make real and complete sexual fulfillment ever impossible.

In general, what he seeks is half-mother, half-sweetheart. Since 1933, however, he also obtains esthetic satisfaction from adolescent boys or girls.

Whoever wrote this section of the report was particularly interested in how Hitler, in 1942, was unmarried.

Hitler married Eva Braun in 1945, several days before they both killed themselves as Germany lost the Second World War.

Much of the report contains laughably bad psychological analysis, including a statement that Hitler’s mother “quite possibly enjoyed” being physically abused by Hitler’s father.

Despite the profile’s claim that Hitler lacked “genuine disgust” for gay people, an estimated 100,000 gay men were arrested in Nazi Germany and between 5000 and 15,000 men were sent to concentration camps on charges related to homosexuality.

Editor’s note: An earlier version of this post attributed the original report to the CIA. While it is currently hosted on the CIA’s website, it was made by the Office of Strategic Services, the CIA’s predecessor.

What if you organized a marriage amendment & no one came?

Can state courts provide some relief to a right-wing Supreme Court?