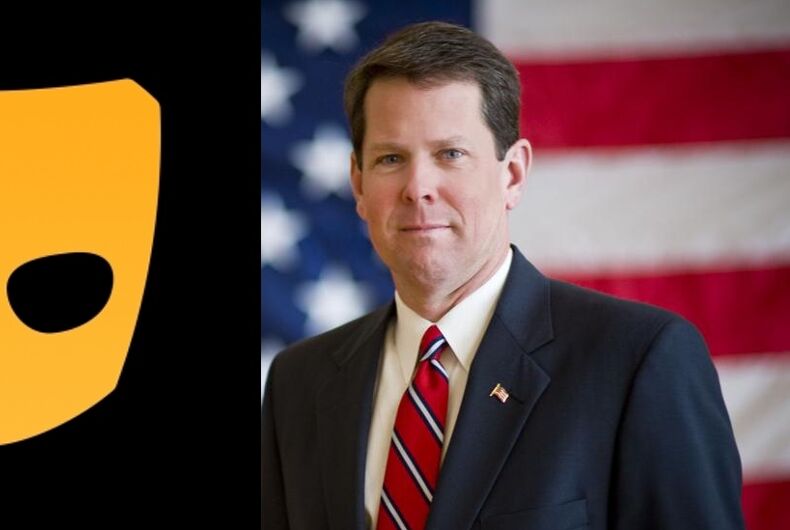 Brian Kemp, the Republican candidate for governor of Georgia, has been advertising on the gay hookup app Grindr.Photo: Composite

Brian Kemp, the Republican candidate for governor of Georgia, has been getting a little action on Grindr lately.

The Atlanta Journal-Constitution reports that Kemp has been advertising on the popular gay hookup app in a desperate attempt to make inroads with the community. Kemp supports giving the religious right a license to discriminate against LGBTQ people.

“We’re here because we stand together, because we know that allies do not run from fights. And because we know we all have pride in Georgia,” she told attendees. “We stand with you and not against you.”

“Instead of cruising for votes on Grindr, Brian Kemp should stand up for LGBTQ Georgians and promote a strong economy by committing to veto RFRA — just as [current Republican Governor] Nathan Deal did,” said Democratic Party of Georgia spokesman Seth Bringman.

“[W]e don’t expect him to find much support. He has made clear that he would sign discrimination into law if he is elected governor, even though 400+ major Georgia employers have said that doing so would harm the state’s economy.”

Here’s how the crowd at the #AtlantaPride reacted to @staceyabrams – the first major party nominee for governor in Georgia to march in the LGBTQ parade. #gapol pic.twitter.com/vw9K2VUAwJ