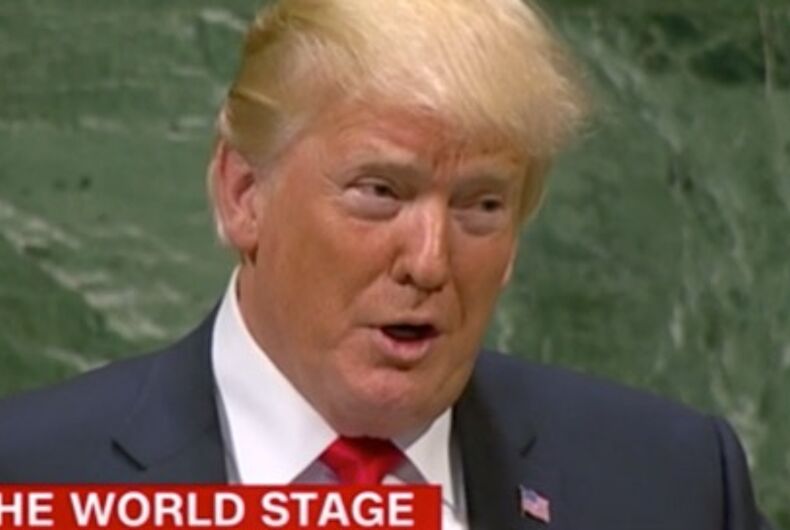 As Donald Trump made wild claims at the United Nations on September 25, 2018, delegates from around the world literally laughed in his face.Photo: Screenshot

President Donald Trump is sure to take to Twitter to express his outrage with United Nations delegates who laughed in his face as he gave a speech at the UN.

Trump boasted that “my administration has accomplished more than almost any administration in the history of our country,” during his speech. As delegates started giggling at the absurdity of the claim, Trump tried to defend his claim.

“So true!” he said, causing the laughter to grow even louder.

Taken aback and grinning like a schoolboy caught boasting about his romantic conquests, Trump added, “I didn’t expect that reaction but it’s okay.”

That’s when the room erupted in laughter at Trump’s obliviousness to his own reputation as the worst American president in history.

Later, German delegates were shown laughing at Trump again when he claimed the country “will become totally dependent” on Russian oil. It’s a claim the president has repeatedly made and been proven wrong.

Former LGBTQ Nation editor Brody Levesque best summed up the response to Trump by, of course, reaching back to one of Trump’s old tweets.

Watch the videos of delegates laughing below.

The sense of Schadenfreude I have right now is delicious:

And here is Germany literally laughing at Trump after he says the country could become totally dependent on Russian energy pic.twitter.com/1NLa99tGLN