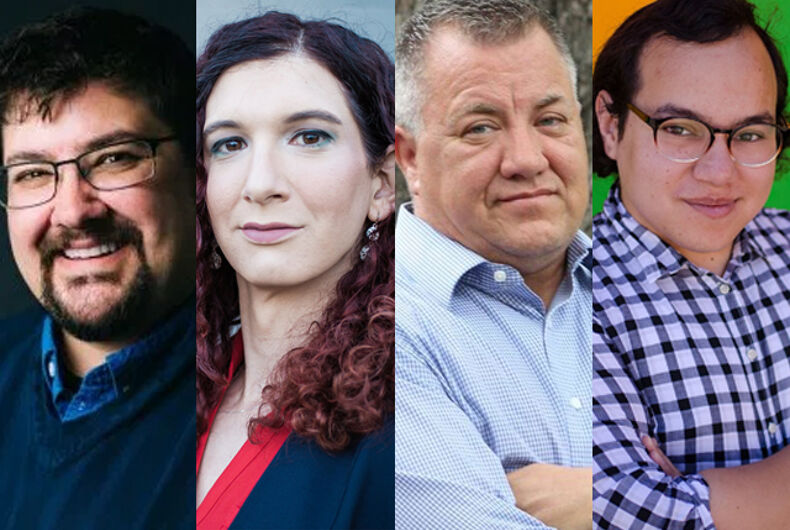 Last year saw the election of Danica Roem to the Virginia House of Delegates. Roem, as well as more than a handful of other transgender people who won races last November, have shown that transgender people can run for — and win — political office.

This November, there are four potential transgender state legislators eying seats. We asked each of them if being transgender plays a part in their run, and what issues they were championing in their home states.

Everett Maroon is running for the 16th legislative district in Washington State. A resident of the area with his wife for a decade, he has had a strong focus on health care, serving as the co-chair of the Greater Columbia Accountable Community of Health’s opioid demonstration project, as well as serving as the executive director of a healthcare-focused nonprofit.

“I think being trans helps me remember that people’s positions in society have a lot to do with their experiences in that society,” Maroon told LGBTQ Nation. “Our perspectives are by definition, limited.”

“My experience as a transgender masculine of center person reminds me that I always need to engage with others who have different experiences than I have had — that I need to seek out people who have been marginalized in different ways so that the policies and politics I advance are inclusive of them, and don’t keep them out. For a district that itself is often forgotten in the debates in our state capitol, this is a resonant theme.”

Maroon is, as he put it, “running in a red district in a blue state,” but hasn’t seen a lot of blowback because he is trans.

“It’s only come up in one mainstream forum, and it was mentioned in a pretty neutral way. I have heard rumbles that there is a faction of opposition who want to make issue of my trans status, but as many people know I published a memoir in 2010 about my transition, so that bird has pretty much flown the coop,” said Maroon.

He added, “I’m proud to be trans and I appreciate that putting myself out there publicly means that I am taking on some measure of representation for other trans people. So far, the vast majority of voters want to talk with me about the issues I’m bringing up when I knock on their doors — and that in itself is a site of privilege, and I know it.”

His goals, of course, include health care and the opioid crisis, both of which are a concern in the 16th District.

Brianna Titone moved to Colorado a decade ago. A geologist by trade, her career brought her to the state. She has since worked as a mining consultant, a substitute teacher, and as a web application developer. She’s running for Colorado House District 27.

Initially a political outsider, she began to get involved in local politics in 2012, serving as a Delegate for Bernie Sanders in 2016, then being appointed as Captain at Large for the Jefferson County Democratic Party in October 2017.

Titone feels that being trans has given her the ability to be able to take harsh criticism and to relate to other marginalized groups and their struggles.

“My identity isn’t something I put front and center to my voters even when I talk to them at the doors unless it’s something they express interest in it,” she told LGBTQ Nation. “The outpouring of thanks and the amount of inspiration I receive from people is amazing.”

“Even before running for office people said I was inspiring and now I have a platform for many others to see. This is an important aspect of what I’m doing. Me being me is lifting up people and it has always been my goal to help people and leave a lasting positive legacy.”

She hasn’t seen a lot of negative feedback being a trans woman seeking office, but did point to one issue she has had to deal with: her voice.

“For most candidates, call time is a key way to get contributions but as a trans person, this is particularly difficult for me because my voice doesn’t match my name,” Titone said. “This has made communication on the phone challenging and has kept my campaign at a disadvantage in garnering widespread support.”

In her district, she points to education funding as a big issue.

“Our state has struggled to fund education because of our complex and often frustrating tax laws. For a state with a great economy, we are at the bottom in per-pupil spending and teacher pay. I don’t want to see the next generation of kids get off to a bad start in life because they can’t get a good education,” said Titone.

She is also championing environmental issues — particularly with an eye towards science-based legislation — high speed Internet, and net neutrality.

Running for the Texas House of Representatives, District 94, is Finnigan Jones.

He’s a native Texan, born in Austin and raised around Dallas/Fort Worth. After serving in the United States Coast Guard, he went to work in the medical industry, then in aerospace. He and his wife also work on transgender causes, founding Trans-Cendence International, Inc., a non-profit support organization for the gender diverse community.

When asked if being trans brings anything special to his campaign, he too stressed his empathy.

“I think the fact that I am a white transgender man helps me reach more constituents without the biases,” Junes told LGBTQ Nation. “I think it does bring something special in the fact that I am much more compassionate and empathetic to struggles within my community. Some voters are excited about the fact that I am trans as it brings more attention to the race.”

“Being born and raised as a woman I have a unique perspective on the issues around women’s rights. My opponent has tried to pass legislation against women’s rights to their choices around health care.”

Of course, last year Texas forced a special session of the legislature, in a failed attempt to pass anti-transgender bills. They have threatened to do this again, which adds an extra wrinkle to the campaign. Nevertheless, Jones doesn’t feel being trans has affected his campaign so far.

“I think I am seen as just another candidate. In fact many of my fellow candidates did not realize I was trans until months into the campaign,” said Jones, stressing that the race would likely be different if he was a trans woman.

He has a lot to say beyond being transgender, of course.

“I have been asked many times if I am a ‘one issue’ candidate. I try and assure voters that that is not the case,” Jones said.

“I will fight tooth and nail for the LGBTQ community should I win, but I will also fight for all minority communities should I win. I think it is vitally important to have more minority representation in elected positions at this time in our history.”

Among his top issues are public education, including a living wage increase for teachers and repairing insurance issues for retired teachers. He is also looking to expand Medicaid in Texas, working on common sense gun legislation, and many other issues.

A graduate of Montana State University, she currently works for a non-profit mental health organization for kids, as well as serving as the Yellowstone County Democrats Vice Chairwoman.

She feels that being trans brings a different perspective to the race.

“We live in such a binary society,” says Marquez. “We look at everything as black and white. I am campaigning to represent one of the most diverse districts in Montana. We need someone who will look at each bill from a different perspective.

Being a trans woman hasn’t heavily affected her run thus far. “When we are out knocking doors, me being trans does not really get brought up, she says.

“Some folks ask about me being trans, but I am there to talk about the issues that are affecting the working class. As I have said numerous times throughout the campaign, this campaign is not about me, it’s about us,” she added.

She’s championing an issue dear to her heart.

“One of the biggest issues that we have been stressing is mental health,” said Marquez. “With Montana ranking #3 in the nation with the highest suicide rate, we have to find more resources to help those who suffer from mental illness.”

She’s also talking about domestic violence, which has been skyrocketing in Montana. She is also working on issues surrounding missing and murdered indigenous women in the state.

In the sweetest way possible, a local community honors a 9-year-old gay student who died by suicide