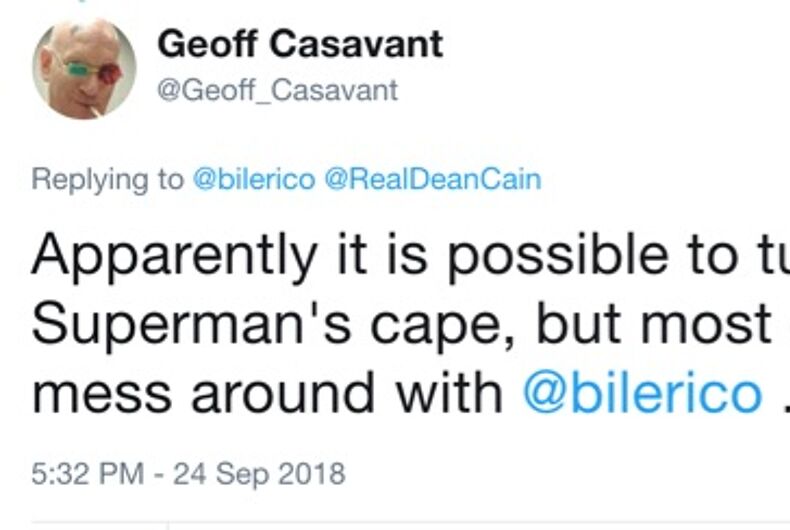 Dean Cain defended his decision to speak at an anti-LGBTQ hate group on Twitter yesterday.

Over the weekend, Cain, who played Superman on a television show in the 90’s, spoke at the Value Voters Summit, which is organized by the Family Research Council (FRC).

FRC is one of the most toxic anti-LGBTQ hate groups in the country. The organization repeatedly calls gay men pedophiles, produces fake “research” that “proves” that LGBTQ people are inferior to straight people, and employs people who call for the criminalization of homosexuality. At the conference, he called LGBTQ activists “intolerant.”

Yesterday, LGBTQ Nation published a post about the controversy, as well as a quote from Cain’s comments at the FRC event about how “intolerant” his critics are.

After that piece was published, Cain tweeted it’s not “bashing” to call LGBTQ people intolerant for not tolerating hate directed at them.

“I never said that,” he tweeted. “I had pressure come from many groups: pro-life folks, pro-choice folks, anti-Hollywood folks, anti-religion folks, religious folks, some LBGTQ folks, and SPLC folks. I stand by what I said.”

If you wrote the (hit) piece, why not reach out to me? I never said that. I had pressure come from many groups: pro-life folks, pro-choice folks, anti-Hollywood folks, anti-religion folks, religious folks, some LBGTQ folks, and SPLC folks. I stand by what I said

So LGBTQ Nation editor Bil Browning broke it down for him. Browning wrote the article Cain was responding to on the social media site and sent the actor the direct quote from the article before starting with his own thoughts.

Oh look. Superman wants to have a chat. Okay. I'm in @RealDeanCain Happy to break it down for you. I'll even start a new thread for you. /1 https://t.co/Q5Z88AjNdE

When you say LGBTQ people are "intolerant" of people who say we should be in jail, killed, are Satanic, etc. @RealDeanCain, you're not supporting the LGBTQ people. You're equating our outrage to their hate. /2

When you use your platform to complain that you're being taken to task for addressing a hate group on Twitter instead of challenging their nonstop lies and insults, you're part of the problem. /3

When you believe that your irritation at taking "heat and abuse" is morally equivalent to their beliefs that if we adopt it's child abuse, our marriages should be nullified, and our sex lives should be illegal it seems like small potatoes. /4

So bashing us for challenging you – by saying WE are the intolerant ones – isn't the action of an ally. It's a self defense mechanism. Instead of taking the people who think we shouldn't exist to task, you chose to aim at us for saying that's wrong. /5

And you have to admit, @RealDeanCain, that's pretty f–ked up. That's victim blaming. When did Superman complain that citizens wanted him to protect them? We expect more from allies – from those in a position of power to actually help us. /6

So, in a nutshell, @RealDeanCain, save your fire for the people who say we are "evil," that we "convert" children, that we're "Satanic," that we rape women in bathrooms, and that we're a danger to society. Because that, Superman, is intolerant. /7

So… bottom line @RealDeanCain Do you think that LGBTQ people who called on you not to appear at a hate group event were being “intolerant” of the @FRCdc hate speech?

Browning also called out Cain for not criticizing FRC for their toxic views.

You’ve said more about your movie than you have about the horrendous things your hosts have said about your LGBTQ fans even. Not one word to say you don’t believe what they do. Not an inch of distance. So do you?

Cain said he was ignorant of their views. When he was told that they want to legalize anti-LGBTQ discrimination, he brought up Muslim bakers (implying that anti-discrimination laws are just an attack on Christians and no one would be bothered if a Muslim discriminated).

When it comes to transgender people’s access to restrooms, Cain’s response was, uh, not exactly supportive.

But Cain was willing to take the bold stance that homosexuality should not be outlawed.

Cain spent the better part of the day responding to various articles about his comments on Twitter and basking in praise from the far-right.

For example, he retweeted a contributor to Alex Jones’s InfoWars who brought up the “gay mafia.”

While Cain might not be all that familiar with FRC’s positions, his position on how it’s actually LGBTQ activists who are intolerant of hate groups is one that he shares with FRC president Tony Perkins.

In 2011, he called “homosexual” activists “intolerant, they’re hateful, vile, they’re spiteful,” because these sorts of people just can’t stand it when people they hate stand up to them.

Apparently it is possible to tug on Superman's cape, but most definitely do not mess around with @bilerico .