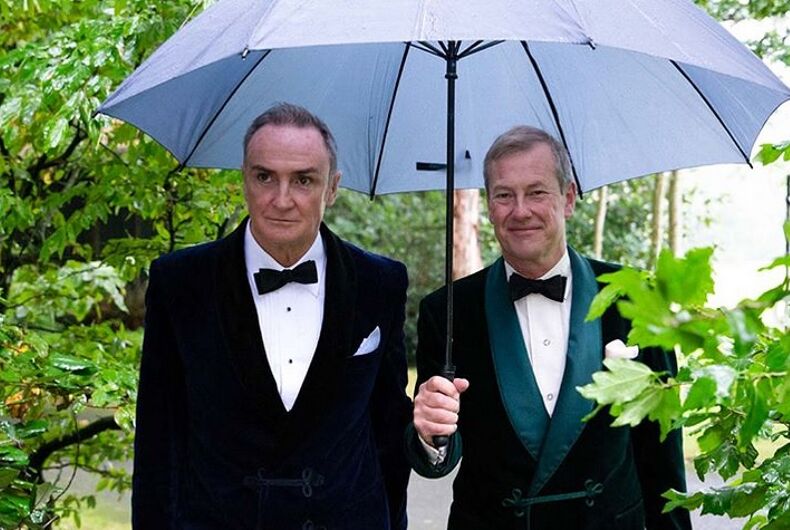 Queen Elizabeth II’s cousin Lord Ivar Mountbatten got married this weekend in the first royal same-sex wedding, but neither she, nor any of her close relatives, attended the wedding.

Ivar, the queen’s third cousin, came out two years ago and is now the first member of the extended royal family to marry someone of the same sex.

Over the weekend, Ivar married James Coyle at a mansion in the country in Devon. Sixty people attended the wedding.

“Well we did it finally!” he posted on Instagram. “It was an amazing day despite the miserable British weather.”

Well we did it finally! It was an amazing day despite the miserable British weather. Fabulous service conducted by Trish Harrogate, chief Registrar for Devon, who set the perfect but lighthearted tone for what is a serious occasion. The accompanying gospel choir were amazing. Thank you so much to Bristol’s Teachers Rock Choir for your superb singing. Also @venetianorrington for the great photos. Most importantly a massive thanks to my 3 gorgeous girls for being so understanding and supportive, without their support this could never have happened! And finally the biggest thank you to James for being just perfect……#wedidit #wonderfulday #despitetherain

His three daughters attended the wedding, as well as his ex-wife Penny, who walked down the aisle with him to give him away.

Members of the official British royal family, though, did not attend, citing schedule conflicts.

“Their diaries are arranged months in advance and they were not free,” Ivar said when asked by the Daily Mail about why they didn’t attend. “But they adore James.”

They also couldn’t change the date of the wedding because the mansion has a tight schedule. “It was the only weekend in the diary when the house was free,” Coyle said.

Ivar is godfather to Louise, the daughter of Prince Edward, Elizabeth II’s fourth son. Edward and his wife are godparent to Ivar’s first two daughters as well.

Why is Superman bashing LGBTQ people at a hate group gathering if he supports our rights?

Democrats may have a secret ally in the midterms: Trump supporters