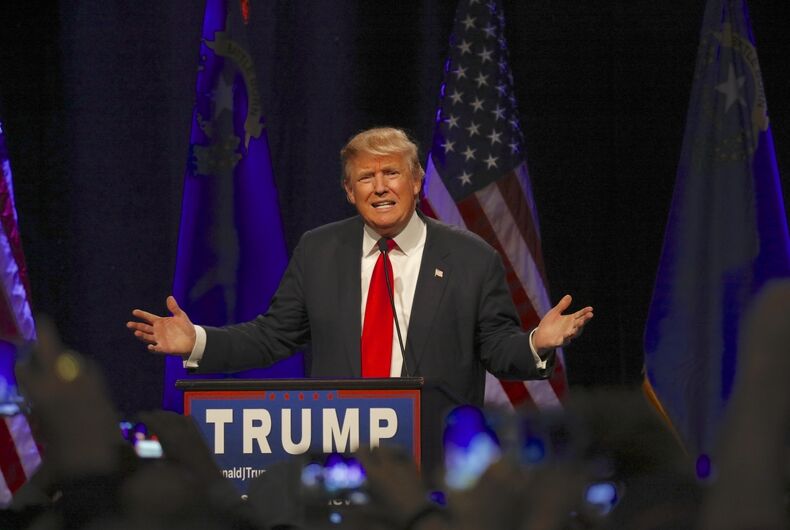 Donald Trump has trained his followers to believe that anything that makes him look bad is fake news. In fact, he’s done such a good job of it that he may help Republicans lose Congress.

According to an internal poll by the Republican National Committee obtained by Bloomberg Businessweek, hard-core Trump supporters simply don’t buy all the evidence pointing to GOP problems in the midterm elections.

“While a significant part of that lack of intensity is undoubtedly due to these voters’ sentiments toward the President, it may also be partly because they don’t believe there is anything at stake in this election,” the pollsters conclude. “Put simply, they don’t believe that Democrats will win the House.”

More than half of the Republicans surveyed who identify as ardent Trump supporters don’t believe the Democrats will succeed in November. Among all voters, the number who thought the Democrats would take the House is 71 percent.

There are a few explanation as to Trump supporters seem to be in denial. Trump has been declaring that Republicans will pick up seats in the fall. The president has predicted a “red wave” in November and says that “we’re going to do much better than anyone thinks.”

Moreover, Trump himself beat all the odds to win the presidency. As the polling analysis noted, “Why should they believe the same prognosticators who told them that Hillary was going to be elected President?” The Fox News bubble, with its endless parade of news stories and commentary portraying the Trump presidency as a resounding success, further reinforces the myth.

However, the poll shows that Republicans have ample cause for worry, if not panic. On one side, they have a complacent base so confident in victory that it doesn’t feel any urgency to turn out. On the other side, they have a significant number of Republicans turned off by the president. As the polling analysis describes them: “Those voters who ‘somewhat approve’ of Trump and those who support the President’s policies but not his leadership style are the ones posing a challenge to the party.”

In fact, the internal poll shows that among every demographic, except men aged 45 and older, Democrats perform better than Republicans in a generic Congressional matchup. As the analysis put it, “the Democrat(ic) party holds an image advantage over the GOP.” Add to this the fact that Trump’s core base, complacent or not, only constitutes 25 percent of the electorate, and you have the recipe for a Republican rout.

Republicans may want to change the topic but at this stage of the game, it’s too late. The analysis says that the election will be a referendum on “how voters feel about President Trump.” With Trump’s approval ratings at a historic low, Republicans should be preparing for the worst.

The queen of England’s gay cousin got married. No one from the royal family attended.