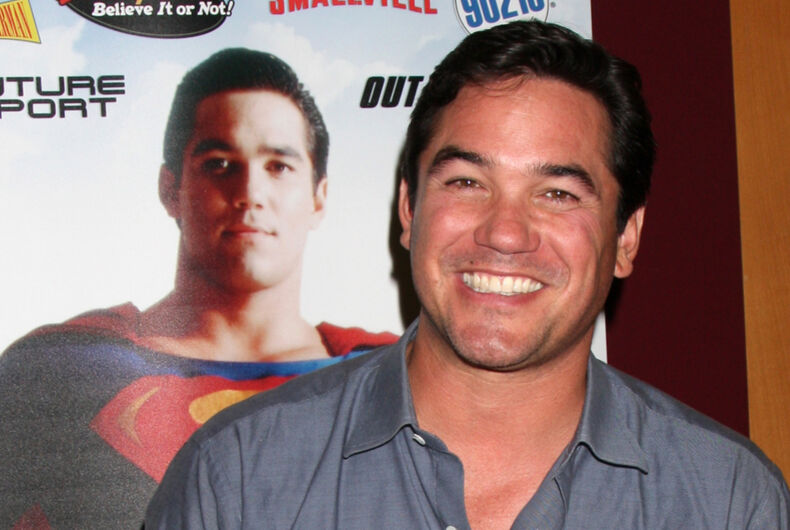 Actor Dean Cain, best known for portraying Superman on television, took heat over the weekend for speaking at the Family Research Council’s Value Voters summit to promote his upcoming movie. The organization has been designated a hate group by the Southern Poverty Law Center.

But when activists pointed out to Cain, who has said he’s a supporter of LGBTQ rights, that the group is one of the worst in the nation, he defended his decision to appear and then bashed the community from the stage for being “intolerant.”

Cain spoke on a panel to promote his new movie, Gosnell. Cain plays the detective who put abortion doctor Kermit Gosnell behind bars. Most of the organization and activists attending the event are vehemently anti-choice.

After GLAAD took to Twitter to ask Cain why he was speaking at the event when he says he supports the LGBTQ community, Cain became defensive.

FRC’s president @tperkins has said this about gay people: “They are intolerant. They are hateful. They are vile. They are spiteful"…"pawns" of the "enemy.”

More on him here: https://t.co/3iTS2UMQfi

First, Cain deflected the concerns, saying he is pro-choice.

“I hope they ask me about my support for gay rights and the fact that I’m pro-choice. I’m happy to have that conversation. I’m not there to do anything other than discuss the film, Gosnell,” Cain said, according to The Advocate. “And I’m pro-choice. That will probably take up the bulk of the time. I’m not there to preach or to lecture—I hope they ask about my support for gay rights.”

But by the time Cain was seated on the stage – where moments before speakers had castigated LGBTQ people – he wasn’t in such a magnanimous mood. When the moderator asked him if he’d received any flak for hobnobbing with hate group leaders, Cain went off.

“Talk about intolerance. It’s ridiculous. I take heat. It doesn’t bother me, I welcome it because I sleep well at night. I know I’m doing something that matches my convictions and my heart and I’ll happily defend the things I say and I stand for.”

The Family Research Council regularly claims that their vociferously insulting speech should be welcomed instead of condemned. They say LGBTQ people should “tolerate” hate speech and accuse anyone who challenges them on it as “intolerant.”

“Love wins when true diversity of thought is tolerated,” the group tweeted during Pride. “Support #FADA” The hashtag stands for the First Amendment Defense Act, the proposed federal law that would allow individuals and businesses to discriminate against LGBT customers.

Police are looking for this alleged gay basher. Have you seen him?

The queen of England’s gay cousin got married. No one from the royal family attended.