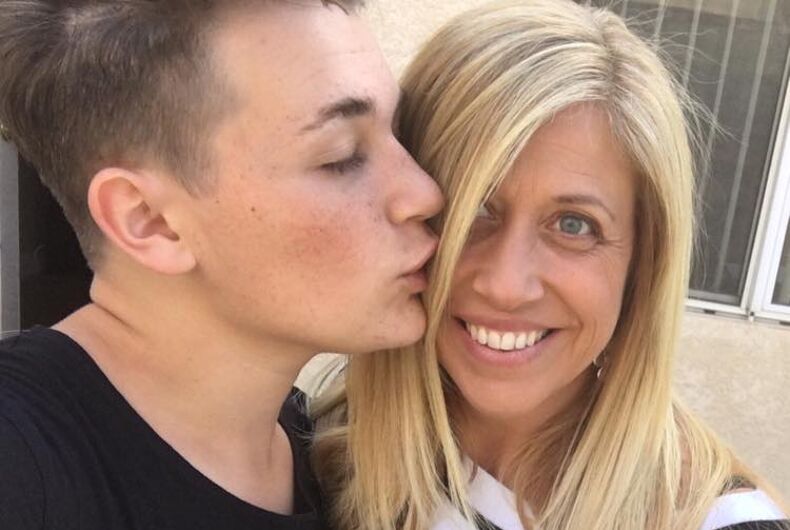 Please stop complimenting me for loving and accepting my gay child.

I’m a mom of two wonderful sons, ages 17 and 15. One of my sons is gay and one is not. No one praises me for loving or supporting my straight son.  But, I sure get a lot of accolades for loving and supporting my gay son, and I’ve been getting these comments for years.

I suspected my oldest son might be gay when he was quite young, as he exhibited very “stereotypically” gay behavior (wanting to wear dresses, identifying more with heroines than heroes in games, books, movies, and preferring the company of girls and women).

As he grew older, he was sure he was gay and shared that with me in a beautiful moment in of all places, Target.

As parents, we often marvel at how different our children can be. But how many people get kudos, even hugs, for loving and supporting one of them?  Yet there is a silent expectation that I’d just innately love the straight one, so I’m just a regular mom when it comes to him, but I’m “amazing” for loving the other half of my heart.

This begs the question: “Do I really deserve praise for loving one of my sons?” Isn’t that kind of sick? Why wouldn’t he get the praise for having the courage to be himself in a world constantly trying to change him, and for coping with microaggressions and discrimination he endures daily?

For the last decade, teachers, fellow soccer moms (and dads), colleagues, acquaintances, and other well-meaning people have consistently made comments to me and my boys, such as:

“I just want to tell you how great it is that you are supportive, that must be hard. Bravo Mama, Bravo. You too, little brother, great job.

“Your son is so lucky to have you. I mean, you are such an amazing mother…making peace with everything as a Christian and all…I think it’s awesome!

“You all are adorable. You are so lucky to have that mama of yours, do you know that?”

“I can’t even imagine how hard that must be. You’re such a great mother! We don’t choose are kiddos, do we? Lucky boy.”

“You are amazing, I mean he’s such a great kid, but wow, that’s a big pill to swallow. Is your other one ok?”

In reality, what all of these comments really mean is: “Hey, it’s great that you don’t reject your gay kid.”

Now, if you want to praise me for anything that goes above and beyond unconditional love for my kids, and clearly excels in the parenting arena, by all means, pour on the praise. But, accepting one of my babies simply because he happens to be gay, doesn’t make me an “amazing mom.” It makes me a parent.

And not one that deserves a medal. In fact, the slew of accolades I receive for simply loving and supporting my gay son (as I do my straight son) is a significant part of what I believe is sustaining the culture of homophobia in our society.

The most interesting and scary part about this phenomenon is that these comments directly imply that my gay son is lucky that I don’t reject him, thereby setting the norm that parental rejection is normal or in any way, shape, or form okay. It’s sick.

You may be thinking this isn’t important, or that it’s trivial. It’s not. Here’s why.

The kudos to me as a parent for loving my gay son are actually microaggressions that normalize homophobia and parental alienation. And, it really cuts deep on a lot of levels.

It sends a message to my son and to everyone else who is not heterosexual that they aren’t innately worth of love the way they are. I would never go up to a fellow parent and say, “You are such a great mom for loving your tall, skinny son” or you’re “brown-eyed daughter.”

Heck, I wouldn’t even say, “Good job loving your jerk wad bully son” or your “hormonal teenage diva daughter” to anyone. Why? Because I expect that they would and do love their child, no matter what. It would be abnormal if they didn’t.

When people use language that implies a category of human worth (like a child is less worthy of love if they are gay or bisexual or transgender), it normalizes homophobia and heterosexism and makes the opposite “special” or “amazing.”

It says to my son and to everyone that gay people are not only not inherently worthy of love, but if they receive it from their parents or family members, we are “put out” or “forgiving” or “loving them despite who they are” and it’s wrong. It’s cruel and it’s oppressive and we have to stop doing this to people, especially children. It’s hard enough to grow up with a loving family, much less being made to feel guilty or lucky that your parents love you.

The good news is that we can change this norm with the language that we use. Just as language can sustain social norms, like homophobia, it can also change them, and quickly. And for many people who care, but don’t want to march in protests or call their legislator to make change, this is a really easy and lazy way to help.

I’m not talking about political correctness or even knowing or understanding what LGBTQ means. As an advocate, in the world we live in where racism, sexism, homophobia and denial are the norm, I don’t even expect people to educate themselves anymore. But, I do think we can awaken to each other’s humanity through language.

I’m simply saying what we all know – that words can hurt or heal. They can empower or dehumanize. And that is important. Dehumanization is the scary stuff genocides are made of. When we strip people of their humanity, it starts with the words we use (i.e. illegal alien, white trash, savage, chic, abomination, and many more that I won’t say).

When we use language, either consciously or subconsciously, that implies that people are less worthy or less of a human, history shows us we have no problem then enslaving or eliminating them. And, that is already happening. Every day there is another pastor or legislator spewing hate about how gay people should die, be denied rights, and stating they are an abomination to God. Can you imagine as a child, hearing someone said you deserved to die just for being for you?

My white privilege and heterosexual orientation shielded me personally from that reality. But I will never forget that so many others have and do experience people wanting to kill them because of the color of their skin, their religion or their sexual orientation.

Ironically, its generally organized religion that suggests that we aren’t supposed to judge the worthiness of man (or woman), but rather that is for God to decide. But, the interconnection of religion, fear and our society walking the fascism tightrope today has made this type of ideology acceptable.

But we can change all of this easily and painlessly, starting with language.

If we use language that protects people’s dignity as humans, then it says to society that we must deal with them as humans, legally, socially, emotionally, and so on. The language that we use sets norms that help condition us to think a certain way about groups of people. The way we think about them shapes the way we feel and ultimately the way we act.

A simple change or shift in how we think about parenting can make a significant impact in our society, and especially for the already marginalized group of gay, lesbian, bisexual and transgender children and youth that live with institutionalized homophobia intertwined with religion and fear every day.

So please, don’t compliment me or anyone else for accepting, loving and supporting our gay children, or parents, brothers, sisters, and friends. Let’s just make doing so the norm. If anyone is to be complimented, it should be them.  They belong to a large group of marginalized people in the United States who live in fear and their courage is remarkable.

If you are lazy or busy or exhausted but want to help, just change your language and make sure the values you say you have are reflected in your language. The start of social change has never been so easy!

More than half of transgender men have attempted suicide