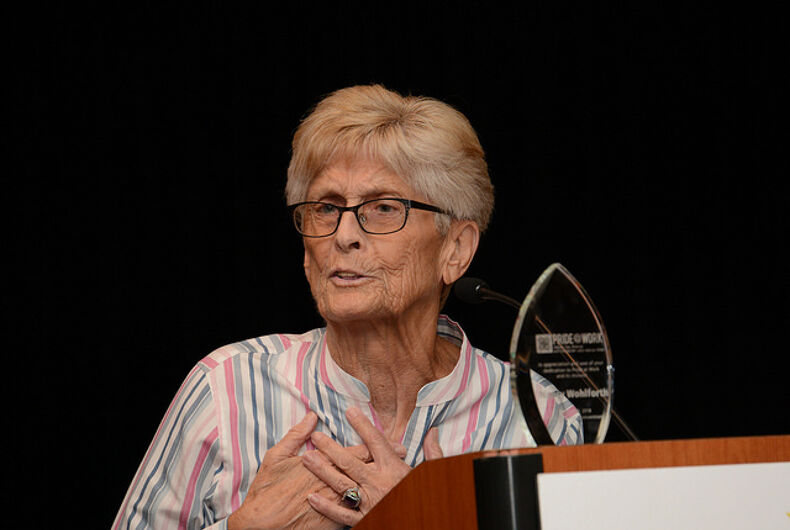 A lifelong activist, Nancy Wolforth got her start at 16, traveling south to do voter registration work. Since then she has marched, organized and been arrested for civil, human, and worker rights, all while maintaining an insistent voice for social and economic justice.

Wohlforth dedicated her career in the labor movement to advocating for equality for LGBTQ workers. She all but singlehandedly made labor unions LGBTQ friendly and used her influence as a labor leader to make Democrats more progressive on LGBTQ issues.

If Democrats wanted support from organized labor, Wohlforth wanted support for LGBTQ rights. And she was the woman in the position to make it happen. As a high profile union leader at the Office and Professional Employees International Union, her voice was instrumental in getting labor support for Democrats.

She was a founding member of the Lesbian and Gay Labor Alliance in 1980, and is a National President Emerita of Pride at Work, the national organization for LGBTQ working people founded by Nancy and others in 1994.

Despite her retirement, Wohlforth is geared up for the November election. In a recent interview with LGBTQNation, she was excited about the midterm elections.

Despite her retirement, Wohlforth remains active in Pride at Work and is geared up for the November election. In a recent interview with LGBTQNation, she was excited about the midterm elections.

Wohlforth says the upcoming elections are the most crucial we’ve seen in a long time.

“If people get that it’s the most critical midterm elections,” she said, “we can elect a Democratic Congress with some guts.”

But the nomination of Brett Kavanaugh to the Supreme Court is foremost in Wohlforth’s mind — particularly the possibility of stalling the appointment until after the election.

“It’s amazing to me,” she said. “Here we have an illegal president, who should be already in jail or impeached, and he’s going to appoint a lifetime Supreme Court justice who’s going to affect everyone’s life.

“So to me, with midterms, the most critical thing is if we can stall the appointment of this guy, and if we win, there would be more commotion, and perhaps we’d have a chance of getting rid of this nominee.”

Kavanaugh’s appointment would change the nature of the Court for more than a generation, and put some hard fought and only recently won gains for LGBTQ equality at serious risk.

“Changing it back to a more progressive Court could take decades,” Wohlforth said.

Citing the backlash of anti-LGBTQ state laws after the Court’s Obergefell ruling, Wohlforth noted that marriage equality could be one of the first significant gains a right-leaning Court might attempt to reverse.

“All you need is a state case like the ‘cake case’ in Colorado, and if Kavanaugh is appointed, they have the majority and the ability to overturn it.”

LGBTQ workers would continue to be at risk. “We still don’t have ENDA, ” Wohlforth said, referring to the Employment Non-Discrimination Act, which would prohibit employment discrimination based on sexual orientation or gender identity.

Without the Court as a path to attain equal rights and protections for LGBTQ Americans, the only remaining avenue would be the glacial pace of the legislative process.

“I’ve been involved in the LGBTQ movement since at least 1979, back in San Francisco, ” Wohlforth said “We were called the Lesbian and Gay Labor Alliance at that time, and our main focus was to get Congress to enact nondiscrimination law, and here, in 2018, we still don’t have that.”

“I’ve always been a union person,” Wohlforth continued. “So my message to LGBTQ people has always been that the only thing that can protect you is a union because you can write nondiscrimination language into the union contract. But unions don’t represent that many people right now, especially among LGBTQ people.”

Recent progressive victories in Democratic primaries has given Wohlforth a hopeful outlook for midterms.

“I think we’ve seen in the turnout for primaries that progressive candidates are reaching people who don’t usually vote in midterms, on issues like health care and women’s rights,” she said.

Wohlforth is reluctant to make specific predictions on results, but believes the momentum will last beyond the outcome.

“I don’t have a crystal ball,” she said. “I do think we’ll win significant races.”

“Even if we lose, people will stay engaged. None of us who were involved in 2016 dropped out. Instead, we built the resistance that led to marches for women’s right and gun control.”

“The movement will continue,” Wohlforth went on. “We have to keep building a movement if we want to see social change. Just getting our friends elected isn’t enough. The movement is far more critical than any one election.”

Pride at Work recently held its national conference, where Wohlforth was a 2018 Solidarity Award honoree. The group wanted to recognize all of Wohlforth’s contributions to both the LGBTQ and labor movements.

“Nancy is a force of nature and far too many people don’t know about her. We’re working to change that,” Davis concluded.

Brett Kavanaugh’s character witness is quite the creepy character

This man is trying to ban Pride in his town. So someone sent him a horrifying package.