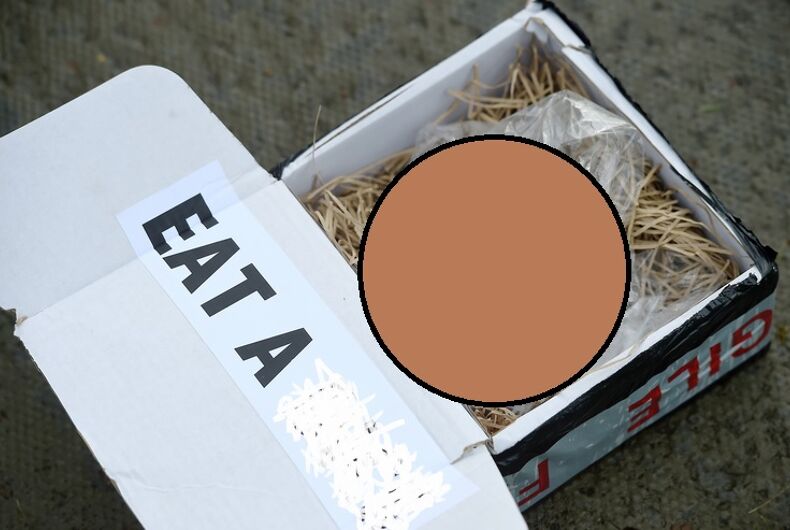 A man who is protesting his town’s pride festivities just got an offensive package in the mail.

Donald Morrison has been on a mission: ban pride in Inverness, Scotland.

According to Morrison, the festivities in the town of about 60,000 – called “Proud Ness” – “thrust lewdness in the faces of men, women, and children alike by frolicking unashamedly on rainbow-colored floats making obscene sexual gestures.”

“A lot of people are unhappy with the event on moral and religious grounds so we are protesting it on the strongest possible terms.”

He hates pride so much that he got over 600 people to sign a petition, which submitted it to the Highland Council.

Anti-#Inverness LGBT pride parade petitioner to me: “This has been unheard of until very recently; the LGB_ community moving into the mainstream of society…” 🤦‍♂️ pic.twitter.com/tbNr7jbkuk

Of course, he has faced some opposition. Many of the people who support Proud Ness started their own petitions, one of which has received nearly 4000 signatures so far.

But one anonymous pride supporter decided to be more direct and send Morrison a package. Inside the package, “EAT A DICK” is written, and the box contained feces.

The Press and Journal reported that he did not order the package, just in case there was any confusion.

Morrison appeared to get the message, but he denies that he is motivated by hate. “I am often accused of being a bigot. My church has no animosity, no hatred, no loathing, no detesting of any gay person. We tell the truth, in love.”

Sophie Bridger of Stonewall Scotland said that the petition shows why pride is still needed.

“Pride parades started as a way to publicly protest against the discrimination and abuse that LGBT people faced and, despite the progress we have made, this petition shows us why they are still needed,” she said.

While the Highland Council says that it is taking the petition under consideration, a spokesperson said, “The matters of concern identified in their correspondence are not sufficient reason for the council to refuse permission for the parade.”

Meet the woman who quietly made sure Democrats became LGBTQ friendly