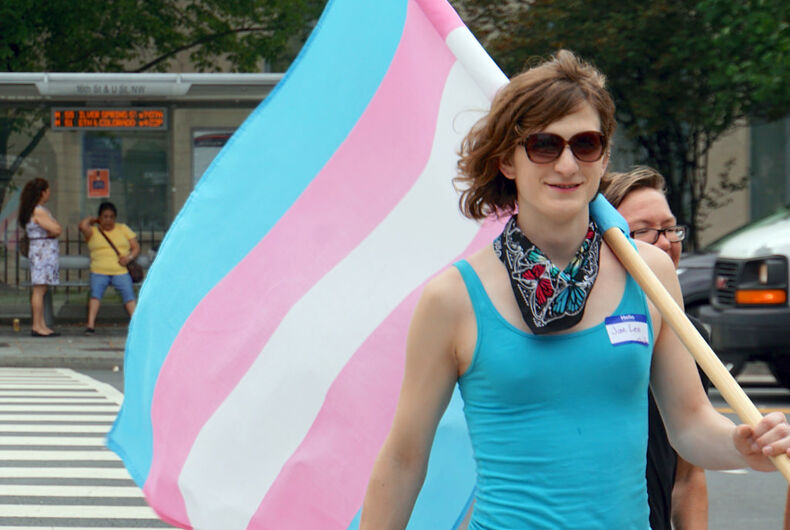 The 2018 election may be one of the most important midterms in quite a long time, and that goes double for transgender people. The stakes are amazingly high.

Here are a few things that should get you to the ballot box on the 6th of November:

Congress is not our friend — but it could be

Generally speaking, Congress is supposed to serve as one of the checks on presidential power, but with the current GOP-dominated congress and the Trump administration, that system has broken down. As a result, Trump-era policies are more likely to go unchecked — or even supported.

One big example is the transgender military ban. This originally was part of an attempt to strip trans military healthcare before Trump expanded it into his full, ill-considered ban. The bill gained no traction before Trump stepped in, but an emboldened Congress after the midterms could decide differently.

Another is the Civil Rights Uniformity Act of 2017 (HR2796), a rather nasty piece of legislation introduced by Rep Pete Olson (R-TX). This bill, stuck in a subcommittee seeks to strip away protections for transgender people by preventing any bills to define sex and gender as inclusive of gender identity, and wants to ensure that no future administration could affirm gender identity inclusive policies.

The bill also sought to define “man” and woman” based on “a person’s genetic sex,” while also not defining what “genetic sex” even means in this context. That’s not only bad news for transgender people, but doesn’t even acknowledge the existence of intersex or non-binary people.

HR2796 isn’t making it anywhere right now, but the sky could be the limit after the midterms, as Congress will have two more years to do whatever they wish.

Not every bill is a bad one: the Screening with Dignity Act (HR6420) would seem to improve issues for transgender people facing issues at TSA checkpoints while traveling. It too is unlikely to go anywhere in this Congress — but might have a chance in a more liberal body.

Then there are the courts

Congress and the Trump Administration have wasted little time packing the courts with socially conservative judges. The Senate has, as of publication, confirmed 68 Trump-nominated judges. Even more are waiting on deck.

Neither Kavanaugh nor Gorsuch are friendly to transgender causes, and it is plenty possible for Trump to get even more possibilities to reshape the Supreme Court in years to come. A Democratic majority in Congress could help stop this.

It will be up to us to send them packing, and get new Democratic leaders into Congress, who can help thwart such bills and make it less likely that the GOP will put these forward while dealing with other issues.

State and Local Politics matter, too

The 2018 legislative sessions around the country are largely wrapping up in advance of the election, but since the beginning of 2018, ten states have introduced 21 anti-transgender bills according to the National Center for Transgender Equality.

Texas is already threatening a return of their attempts to undermine trans rights in their state, and plenty of others will follow their lead.

With fresh sessions coming up in 2019 and beyond, and the federal government being largely anti-transgender, it’s all the more important to make sure you’re protected at the state level.

Nowhere is this more obvious than in Massachusetts, where Question 3 could repeal already existing transgender rights. A win is far from assured at this point and a loss there could be just as damaging as the similar repeal of the Houston Equal Rights Ordinance initiative in 2015.

It’s not all dire, however. We also have another chance to help transgender people win; from school board members in San Francisco to the gubernatorial run of Christine Hallquist in Vermont, we have several chances to be part of the decision-making process across the country.

So if you are transgender, or an ally of transgender people, this is not an election to sit out. Make your way to the ballot box this November. Everything may be riding on it.